Health workers only getting Rs2 per jab, while beneficiaries demand return of old pension scheme 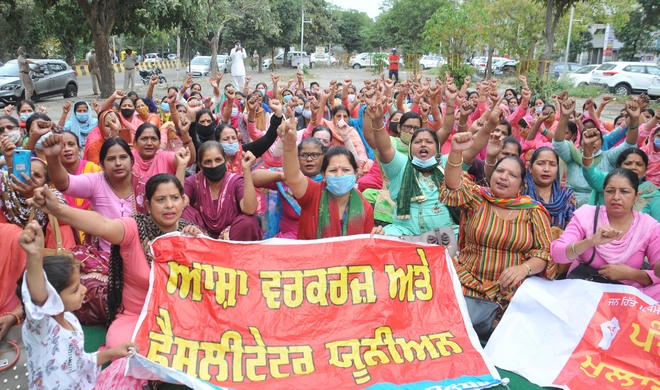 Asha workers during a protest in Jalandhar on Tuesday. Malkiat singh

ASHA workers held a protest outside the District Administrative Complex on Tuesday against the state government. The members alleged that they were getting only Rs2 per vaccination.

The president of the union Gurjit Kaur said the ASHA workers were being asked to get patients for vaccinations and they were being given Rs2 per vaccination. “If we convince and help inoculate 100 persons, we will get Rs200. Do you think it is ok? We are getting harassed,” she said, adding that they have been on frontline since the pandemic started and had to get used to people’s wrath. “When we used to visit people’s homes in the beginning to ask them if anyone was having symptoms, people sitting in the government offices and ordering us won’t even know what insult we have had gone through then,” the members said.

The members also said that they had been entrusted with various tasks under the Ayushmaan Bharat Yojna. They announced to boycott the works if the DC doesn’t give them time for meeting so that they could convey the problems.

Meanwhile, another protest was held by Punjab, UT and Pensioners Joint Front Union. The members burnt the effigy of the state government and said the officials were not doing anything and nobody was listening to their demands. The members have been demanding to reinstate the old pension scheme. They said if the government doesn’t heed, then they will ensure that the Congress is voted out of the power. The members also announced to hold a zonal-level rally on April 27.