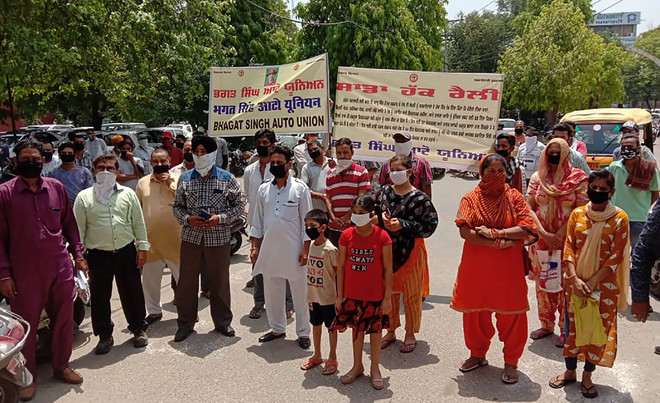 Though auto-rickshaws have finally started plying on city roads after two months of the lockdown, drivers still find themselves at the received end. They are of the view that permission to ferry only two passengers is not profitable. They said their earnings these days get exhausted in paying for the fuel.

Demanding financial assistance from the government, hundreds of auto-rickshaw drivers under the banner of the Bhagat Singh Auto Union on Thursday thronged the District Administrative Complex.

The drivers, who were accompanied by their family members, including children, urged administration officials to immediately provide them financial assistance. It is the third protest by the auto-rickshaw drivers since the announcement of the curfew in the state. Earlier, they asked the state government to register them as daily wagers.

Putting forward their demands, the protesters sought financial help of Rs6,000 per month for each auto-rickshaw driver and deferring loan installments till November. While submitting a memorandum to Additional Deputy Commissioner (ADC) Jasbir Singh, Ranjit Kumar, president of the union, said the statewide lockdown has impacted the livelihood of auto-rickshaw drivers.

The auto-rickshaw drivers said they were struggling to make both ends meet. They threatened to intensify their protest in the coming days if the administration failed to pay heed to their demands. Rakesh Verma, general secretary of the union, said the drivers would again stage a dharna soon.