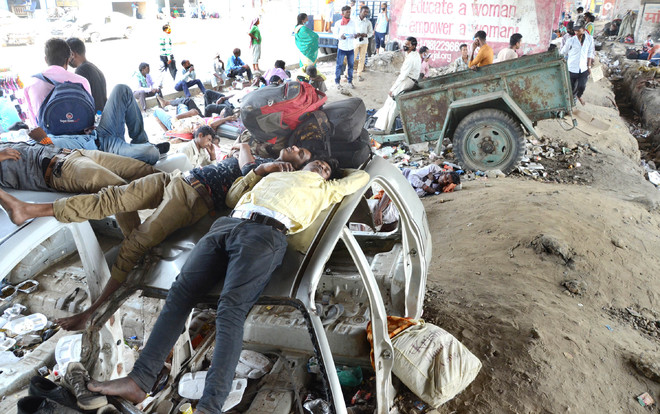 Hundreds of migrant labourers have been camping near the city bypass awaiting nod to board Shramik Special trains.

A majority of them have received messages confirming their registration and a follow-up message saying “dhairya banaye rakhein” (please be patient), but the call for boarding the trains never come. In many cases, it has been nearly a month since they last heard from the authorities. Driven away from the railway station by the police, they are now camping under flyovers in the city.

Most of the crowd comprises jobless workers and their families from Faridkot, Amritsar, Gurdaspur, Hoshiarpur, Kapurthala and Jalandhar. Those from neighbouring districts had heard that they were required to board the train from Jalandhar.

The district administration has so far sent 79,800 labourers to various destinations via 66 trains. With the city’s underpasses becoming migrants’ abode, many vendors have opened small shops to cater to their daily needs.

Putting up at Pathankot bypass, Munna Alam, a native of Betiyan (Bihar), shows his bruised arm. He alleges that he was beaten up by the police while queuing up at one of the screening centres in Jalandhar. He has tried six times to get on to a train to Bihar, but to no avail.

Similarly, Sudhir Kumar, who came from Faridkot, says, “I came here day before yesterday. There was no train from Faridkot. I got registered and also got the message, but never got the green signal. The wait seems endless.”