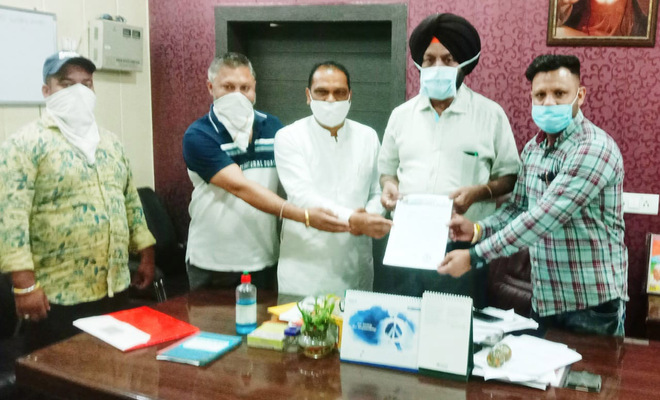 The councillors hand over a memorandum to the Civil Surgeon (in turban).

Dispensaries in the rural areas and non-developed areas play an important role for those who cannot afford to go to other private hospitals for minor problems. Two councillors from the city have raised an issue of the shifting of a dispensary. Ward number 72 councillor Mintu and that of Ward No. 78 Jagdish Samrai took up the matter of shifting of a government dispensary from their areas with the Civil Surgeon today and gave him a memorandum.

The councillors said there were mothers who used to get themselves and their new born or toddlers vaccinated against various diseases on a regular basis at the dispensary. Also, people of the area would get first-aid treatment easily at the dispensary.

Councillor Samrai said even though the population was high, the dispensary was shifted from the place, which was not fair to the residents of those areas. The councillors demanded that a permanent doctor, an experienced Auxiliary Nurse and Midwifery (ANM) and ward attendants be appointed at the dispensary to facilitate the residents.

Samrai said earlier, the dispensary was at a walking distance but now the distance has increased and people would have to bear extra charges of transportation to reach the facility. He also said the matter had been brought to the notice of Jalandhar West MLA Sushil Rinku who assured them to raise the issue with the Health Minister.

Most of the people at both the wards belong to economically weaker sections. About 80 per cent of the ward no. 78 is covered by slums.