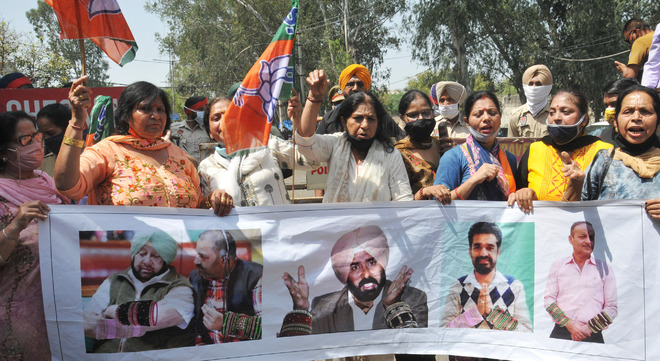 District Mahila Morcha activists of the Bharatiya Janata Party held a protest here on Wednesday against the ‘deteriorating’ law and order situation in the state. Party’s district president Archana Jain, state Mahila Morcha vice-president Niti Talwar and in-charge Rakesh Sood were also present during the protest. The protesters marched towards the residence of local MLA-cum-Industries Minister Arora and raised slogans against Punjab government. The protesters were adamant to reach the Arora’s house, which police did not allow. Finally, the protesters handed over bangles to police officials for Sunder Sham Arora. The BJP women leaders alleged, “ The law and order situation under the Capt government has completely broken down. Hundreds of women have fallen prey to pouncing. Thefts, robberies are happening continuously and the criminals are out of the reach of the police. Due to the deteriorating law and order situation, the fundamental rights of BJP leaders and workers are being violated.” Archana Jain said that if the law and order situation was not improved soon, the Mahila Morcha will intensify its protests in coming days.