Commuters at receiving end due to defunct traffic lights 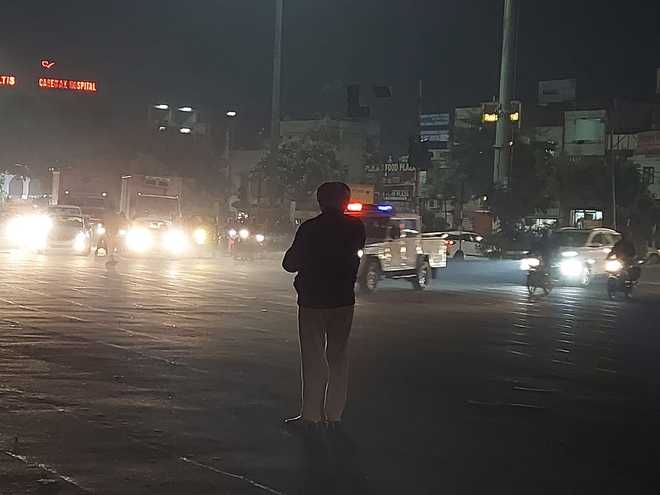 While National Road Safety Month is being observed in the district these days under theme ‘Sadak Suraksha Jeevan Raksha’, there seems no solution to the inconvenience faced by commuters on the roads due to the dysfunctional traffic lights. It has become a regular scene that the traffic police have to manually manage the traffic.

The traffic lights on the busiest chowks of the city apparently need repair as they have been lying defunct for the past many weeks. Locals also took to social media to highlight their plight. Besides criticising the civic body, they are also accusing it of not doing the needful.

Commuters said that due to cold there was more risk involved. At times, the traffic lights stop giving signals and they rely on the mercy of the lights erupting from vehicles. One of the users wrote on social media that on Tuesday stoplights at the Guru Nanak Mission Chowk were not working, leading to chaos on the road. It took more than the usual time for the officials to clear the traffic from one direction. Similarly, problems related to the traffic lights at Pathankot bypass Chowk, Ravidas Chowk, Workshop Chowk, and Nakodar Road were also underlined by the residents.

Moreover, as several stretches on Jalandhar-Amritsar highway and other city roads, including Ravidas Chowk were recently mentioned among the black spots or the accident-prone zones, it has become more significant to resolve the issue.

It is also prominent to mention here that Maqsudan bypass is one of the busiest roads in the city which receives heavy traffic during the day as well as night. People usually take this route to commute to Amritsar or subsequent areas. Vimal Kumar, a resident of the Urban Estate Phase-2 area, said, “A number of traffic signals in my area have been lying defunct for a long time but the authorities concerned have not done anything in this regard.” While accusing the authorities of not maintaining traffic lights, he urged them to streamline the mechanism to ensure proper maintenance.

ASI Kamaljit Singh, a traffic police personnel, said the repair was done by the Chandigarh-based technicians, however, this time the repair has been delayed. Apart from the Guru Nanak Mission Chowk and Apeejay College, the traffic police in large numbers remain deployed at Kapurthala Chowk, Model Town and other areas to manage traffic. In the absence of stoplights, a portable beam light is used to move the vehicles smoothly on busy roads.