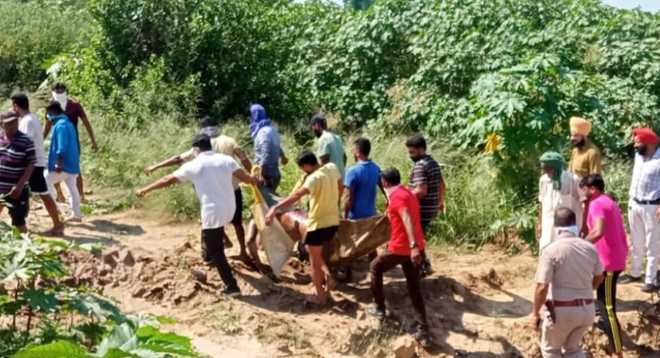 Body of murdered youth Hardeep Singh Bunty being taken out from the Bein rivulet.

Missing for the past nearly three days, Jalandhar police on Tuesday found the body of a 35-year-old youth of Chittewali village near here from the Bein rivulet.

The deceased, identified as Hardeep Singh, alias Bunty, went missing on September 11. His brother Gurdeep Singh said he kept searching for him throughout the night, but could not find any clue and lodged a complaint with the Sadar police station the next morning. The police teams analysed the footage of CCTVs in and around the village to spot Hardeep. In a video, the police found him going along with his friend Vikki and his brother Tony.

The police rounded up the brothers and during interrogation they revealed that they had murdered him and thrown his body in the Bein rivulet. The police took both the accused to the site and with the help of local divers fished out the body of the deceased.

SHO, Sadar police station, Sukhdev Singh said both the accused had been taken into custody and were being interrogated to ascertain the reason of the murder. He said so far it could only be found that Hardeep used to tell Vikki and his brother not to indulge in any wrong activities over which they got enraged and murdered him.