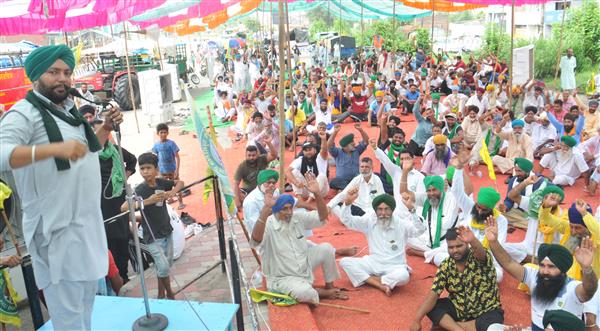 Sugarcane growers and the 31 farm unions of the Samyukt Kisan Morcha (SKM) have postponed their ‘mega meet’ over the pending dues on the Phagwara highway on August 25.

Farmers, who have been holding a sit-in under the aegis of Bhartiya Kisan Union (Doaba), said the decision had been taken in view of the government’s assurance to them that Rs 24 crore received through the auction of the defaulting sugar mill’s properties elsewhere will be deposited in their bank accounts by August 30.

Will wait till Aug 30; ongoing stir to continue

The government has told us that our money (dues) will come by August 30 after selling off the land of the defaulting sugar mill. We will wait till then…. the ongoing dharna will continue. A meeting of 31 unions of the SKM will be held on Thursday to decide the future course. —Manjit Singh Rai, President, BKU (Doaba)

Notably, hundreds of sugarcane farmers have been on an indefinite agitation outside Golden Sandhar Sugar Mill on the Jalandhar-Phagwara highway since August 8, demanding the payment of Rs 72-crore dues that have been pending for the past three years.

Earlier on August 12, farmers blocked both sides of the Phagwara highway by bringing in tractors. They later however partially lifted the blockade from one side of the highway with a warning that a Delhi-like assembly would be held on August 25 if the government did not respond to their demands by then.

In a video statement released by Manjit Singh Rai, president, BKU (Doaba), today, he stated: “The state government has told us that our money (cane dues) will come by August 30 after selling off the land of the defaulting mill. So the big gathering of farmers to be held tomorrow (August 25) at Phagwara is being postponed. The ongoing dharna will continue as usual, as long as our demand is not met. A meeting of 31 farmer unions of the SKM will also be held tomorrow at Phagwara. The future course of the struggle will be declared after that. Farmers from circles and blocks will continue dharna as per their fixed duty. We will hold another meeting if the state government doesn’t pay our pending dues by August 30 as promised.”

Davinder Singh, vice-president, BKU (Doaba) said, “The blockade on the auction of the Fatehabad land of the mill has been lifted by the state government. We had been assured during a meeting with the Agriculture Minister in a meeting held a few days ago that we will get Rs 24 crore into our bank accounts by August 30. The future course of the protest will be declared after the meeting of the SKM to be held at Phagwara tomorrow.”