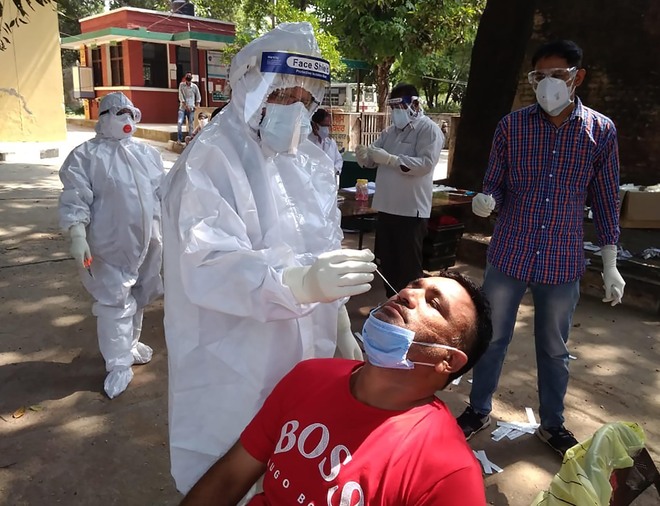 Drastic increase in the number of Covid cases in the district has set alarm bells ringing. According to experts, this wave would be more severe and dangerous in the coming days as temperature will dip further. Hence, experts have warned everyone to be more cautious.

Senior Medical Officer Dr AS Duggal said: “People are not at all serious, there is a kind of fatigue among them, but that doesn’t mean one should stop taking precautions. Deaths are increasing, cases are on the rise. We are expecting that the numbers will increase by the first week of December.”

“People didn’t bother about taking appropriate measures during the festive season, which is why we are expecting another spurt. If we analyse, we are seeing more number of deaths than before,” he said.

He said if people have symptoms, they still don’t get tested because in case they test positive, they will have to be on rest for two weeks. “Here’s when they commit a mistake. What they do is, if they have symptoms, they just wait at home and rest. The lapse occurs when they feel better in four or five days and symptoms disappear. They go to work, meet people become potential carrier of the virus. Here is when the problem starts and we don’t know how many such carriers are roaming outside,” Dr Duggal said.

“This is the issue that remains to be addressed. Also, we are seeing people dying of Covid who didn’t even have any comorbidity. I have seen several cases. Young people, having no other problem, who got late in getting treatment have died. So, people should be aware enough to quickly act the moment they see any symptom,” he said.

A Kapurthala-based pharmacist also raised the same concern. He said people come to him and ask him to give medicine that will treat their fever and flu-like symptoms. “When I ask them to go get tested, they simply deny saying they won’t and in fact do treatment at home,” he said.

Dr Duggal advises people to keep themselves warm and keep on having warm water and doing gargles to avoid suffering through severity of the disease.

Within a span of just 24 days, the district has reported a surge in deaths due to Covid-19. While 470 people had succumbed to the virus in the district till November 1, the toll increased to 538 on November 24. Similarly, the tally of positive cases surged by 1,967 cases in 24 days as 15,198 people were reportedly tested positive by November 1, whereas it spiked to 17,165 on November 24. Medical Officer Dr Kashmiri Lal said: “The number of deaths has increased this month as compared to previous days. The cases will increase in the winter months. Hence, proper precautions are necessary.” As many as 94 Covid-19 cases were reported in the district on Tuesday, taking the district tally to 17,165. Apart from this, three deaths were also reported, taking the toll to 538. According to reports, total 3,57,353 samples have been collected in the district so far, of which 3,21,177 were negative and the results of 3,475 samples were still awaited. There are total 1,037 active cases in Jalandhar and 15,590 people have been discharged after being cured of the virus so far. TNS

The reports of 845 samples was received in the district on Tuesday, of which 25 new cases have surfaced taking the tally of Covid-19 cases to 6,821. Civil Surgeon Dr Jasvir Singh said 1,708 new samples of people with suspected flu symptoms were taken on Tuesday, taking the total number of samples taken till date in the district to 1,87,398. According to reports received from the lab, 1,79,858 were negative, while 1,986 reports were still awaited and 133 were invalid. The number of deaths due to the virus is 244 in the district so far, while no Covid death was reported on Tuesday. The number of active cases is 201, while the number of patients recovered is 6,376. Of the 25 new positive cases, 18 are from Hoshiarpur city, while the rest are from various blocks of the district. OC