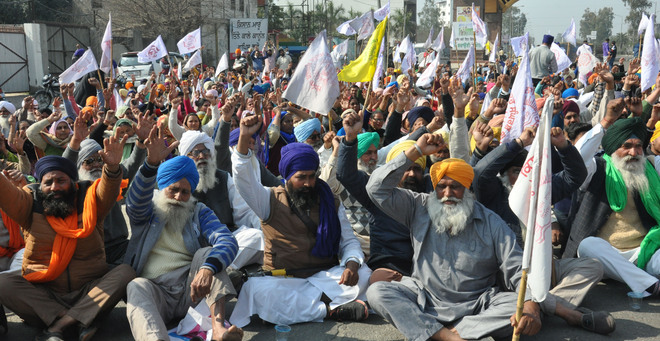 Members of various farmers’ organisations blocked the Amritsar-Delhi National Highway during a protest call at PAP, Jalandhar, on Saturday.

The ‘Delhi Chalo’ agitation by farmers on the outskirts of the national capital entered its the 73rd day on Saturday. On the call given by the Sanyukt Kisan Morcha for a nationwide ‘chakka jam’, farmers protesting against the Centre’s new farm laws blocked roads and highways at several places in the district.

Holding banners and placards, the young generation of farmers took the centre stage. Women and children, too provided equal support at the protest sites.

Interestingly, while concluding the three-long hour protest observed between 12 PM and 3 PM, locals and farmers resorted to honking cars reportedly to oppose the farm laws. Farm leaders said through mass honking, they were trying to wake up the government.

While the police and anti-riot team were deployed on the highways in large numbers to avert any untoward incident, leaders of Shiromani Akali Dal (SAD) and Congress were also present at the protest sites to stand with farmers.

Kulwant Singh Mannan, district SAD president, urban, who was present at the Maqsudan-Amritsar highway, said: “The PM Modi-led government is inattentive to the plight of farmers. Instead of fields, peasants are on roads, struggling to restore their rights, however, the Central Government was unmoved by their agitation. We also condemn the internet ban on the Delhi-Haryana borders. The arrests of farmers and activists have raised questions on human rights violations in the largest democratic country. We will continue to support farmers till their demands are accepted.”

From city-based youth icon Balraj Singh Khera, a TV reality show winner and Pollywood actor, to school going kids, every one raised slogans against the Modi government at the PAP National Highway. Khera said instead of banning the social media accounts of farm activists and farm leaders, the government needs to take action against rumour-mongers spreading false information. 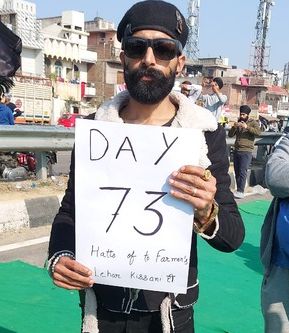 Amid the road blockade by farmers and political groups, the passengers, be it those travelling by bus or train, were forced to take the road on Saturday. Vehicles and trucks entering and exiting the city remain stranded on the highways. Tractors were parked on roads to curb the movement of commuters. Karandeep Singh, who had come from Tarn Taran to visit his relatives in Jalandhar, said: “I was aware of the protest, but I thought I will make it before noon, and later board a bus back home. However, the bus arrived around 11.15 am in Kartarpur and I got off a few kilometres away near Vidhipur. The police didn’t allow the bus to move ahead. I ultimately got down and covered 5 kilometres on foot.” Vikar Kumar, a student, who had come from Hoshiarpur, and was looking for a bus to reach Amritsar, remained stranded till 3 pm. All national and state highways across the district were blocked by farmers. The biggest show was seen at PAP Chowk. The intersection is crucial as all traffic from Jalandhar towards Amritsar, Phagwara and Ludhiana gets stuck here.