Both leaders blame each other of copying ideas 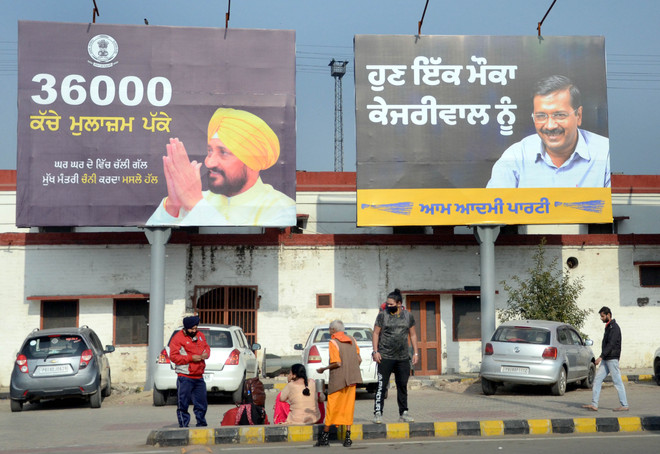 While both of them are projecting themselves as common man?s CM, a neck and neck poster fight seems to be on between them ahead of the forthcoming Assembly poll in the state. Sarabjit Singh

All those observing these hoardings for the first time can be heard commenting that both the Punjab Government and AAP have either hired the same outdoor publicity company or at least one of them has been following the other as such stark similarity in hoardings between two rival parties cannot be a sheer chance.

Similar hoardings have come at a time when there already is a talk over similar promises and doles being announced by both the ruling Congress in Punjab and AAP. Kejriwal has been calling Channi a fake aam aadmi (common man) as the Punjab has been adopting a working style similar to Kejriwal. If Kejriwal has promised 300 units of free electricity to each household, Channi has already reduced the power tariff by Rs 3 per unit of those having less than 7 KW connection, besides waiving off the pending bills of all defaulters of 2 KW connections. Both of them have been wooing autorickshaw drivers. If Channi had tea with auto walas, Kejriwal had dinner at an auto driver’s place.

The only difference in the hoardings is in the message. Most hoardings of the CM have various one-liners telling about the works he is doing like ‘36,000 kache mulazim pakke’ (meaning jobs of 36K contractual employees in Punjab are being regularised) or ‘2KW tak bijli billan de bakaye muaff (meaning pending dues of power bills for 2 KW connection holders waived off). On the contrary, most hoardings of Kejriwal have the message, “Hun ik mauka Kejriwal nu”. His hoardings have the party symbol broom on a yellow band at the bottom.

AAP leader Atam Parkash Singh alleged: “The government has been aping us everywhere. They have even copied our hoardings.”

The Public Relations Department officials have said all their hoardings had come up before mid-November and AAP leadership perhaps followed them going to the extent of even ensuring that their hoardings appeared just neck and neck.