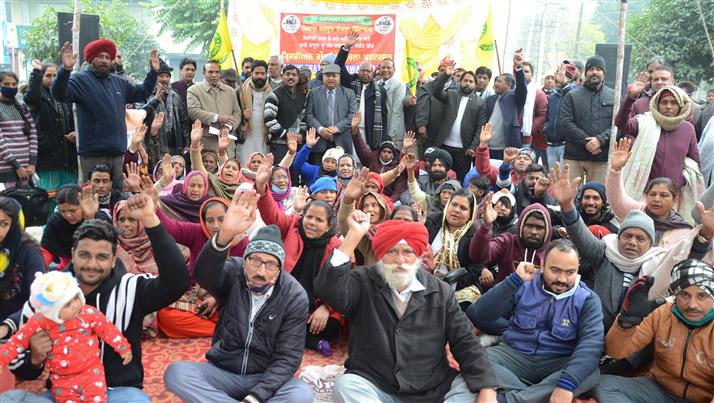 Jalandhar: Priests and heads of various Christian organisations on Friday held a protest against the Centre for not repealing the three agri laws. They supported agitating farmers and urged the Central Government to consider the demands of protesting farmers. Members of various Christian bodies flayed the style of functioning of the government. They said law and order situation can get affected if the Centre continues to stick to its stance. Arch Bishop of Pentecostal Diocese of Punjab PJ Soloman, chairman of Rashtriya Masihi Sangh Fares Masih, Punjab Christian United Front chief George Soni, Punjab Christian Movement chief Hamid Masih, Pastor Ashok Masih and Pastor Surinder Gill of the United Pastors’ Association were present on the occasion. TNS

Jalandhar: The Excise and Taxation Department raided premises of three cigarette and tobacco dealers at Gur Mandi on January 21 evening. The teams were headed by Kamaljit Singh, Assistant Excise and Taxation Commissioner (AETC), Jalandhar II, and Darveer Raj Kaur, AETC, Jalandhar I. The officials said they received a tip-off that these firms were purchasing cigarettes without bills. Paramjit Singh, District Excise and Taxation Commissioner (DETC), said dealers used to transport beedi from Delhi in cars without bills (due to high Goods and Services Tax on these items). “They used to put beedi in cartons and take bill of only one carton. We have taken the stock from five godowns in our custody and have started further investigation,” the DETC said. He said they would recover purchase bills from the dealers. The District Excise and Taxation Commissioner, said, “There is 28 per cent GST on these items apart from 50 per cent cess. Thus, tax evasion is always suspected.” Earlier, raids were conducted in Bathinda and Amritsar. “More raids will be conducted in near future. The drive won’t stop,” said Paramjit. TNS

Rs 2 lakh given for bar library

Kapurthala: Chairman of the Bar Council of Punjab and Haryana, Chandigarh, Karanjit Singh on Friday visited the District Bar Association (DBA) office and handed over a cheque of Rs2 lakh to President DBA, Kapurthala Malkiat Singh Thind for the upgrade of Kapurthala Bar Library. DBA press secretary Pawan Kalia, said Chairman Karanjit Singh also declared one of the members of DBA, Kapurthala, Khalaar Singh Dham as co-opted member of State Bar Disciplinary Committee. Senior members of the DBA, Kapurthala, including JJS Arora, Rakesh Sharma and Harcharan Singh addressed the gathering and presented different grievances being faced by the advocates especially during lockdown before the Chairman of Bar Council Punjab and Haryana. During his address, the council chairman assured them extending all kind of help. TNS