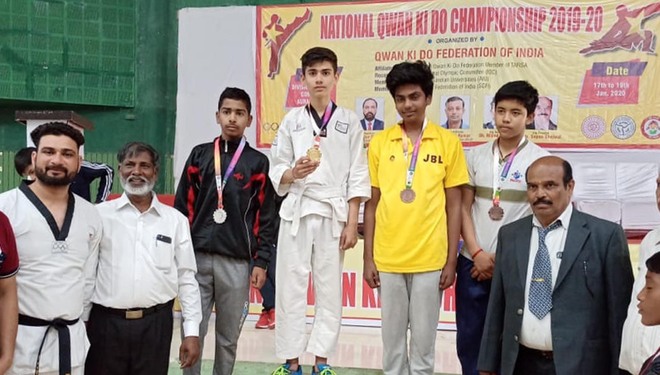 A resident of Shaheed Babu Gulab Singh Nagar, Yuvraj represented the state in the Under-17 open qwan ki do games category. The three-day championship held from January 17-19 was conducted by the Qwan Ki Do Games Federation of India, in which around 1,000 players from across the country put their best foot forward.

Besides Ravi, Rajinder Kumar, a Class VII student, also won bronze medal on the third day of the championship. Players from as many as 13 states participated in the championship and the teams from the state lifted the overall first runners-up trophy. Nikhil, president, Qwan Ki Do Punjab, and state sports general secretary Kair Singh applauded the students for their victory.

Yuvraj said he started learning the game six months ago and since then he had been practising it every day. Earlier, he had medals in various inter-school tournaments. “Winning a gold medal at the national-level championship in which players from different states participated gave a boost to my confidence and now, I will work towards improving my sharpness and techniques to outshine in other such tournaments,” added Yuvraj, who knocked his opponents in the three rounds of the games and last battle was fought with a player from Karnataka. Similarly in the open qwan ki do round of the championship, DPE of the school, Vishal Kumar, also won a bronze.