Ahead of Assembly elections, a series of protests by different sections of society a regular affair 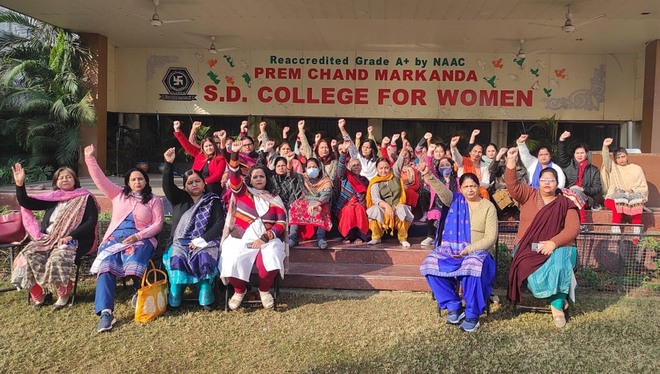 With Assembly elections around the corner, dharnas and protests have become the order of the day in the city. While, the Punjab Nursing Association went on protest on Tuesday disturbing the normal functioning at the government hospitals, even the contractual staff of Punjab Roadways remained off work for four hours today seeking their regularisation.

If this was not all, the NHM workers and aspirants for the vacancies in the Punjab Police are already lodging their protests. Leaders of all parties, including SAD and BJP, have already stood behind the police aspirants, who were allegedly beaten up on Saturday last for blocking PAP gates.

The Tehsil office staff, too, has been protesting against the alleged action of the Vigilance Bureau against a Tehsildar of Hoshiarpur. The clerical staff of government offices, safai karamcharis of the Municipal Corporation and PSPCL employees have all been waging war against the government for fulfilling their demands. They all seem to be in race against time for getting their demands fulfilled ahead of the imposition of the Code of Conduct for the Assembly poll in Punjab.

The leaders of the Opposition parties are supporting the unions so that the failure of the ruling government gets exposed and they gain out of it. Arvind Kejriwal, who was on a tour to Doaba, too, chose to highlight the issue saying: “All across the Punjab, the government has put up hoardings mentioning that 36,000 contractual employees were being regularised. If it is actually so, why are teachers, safai karamcharis, doctors, nurses and transport staff all protesting? It means that CM Charanjit Singh Channi is lying to people with his false promises.” In any case, it is the commuters who are bearing the daily brunt as everyday highways and main roads of the city are being jammed and traffic in the entire city gets disturbed.