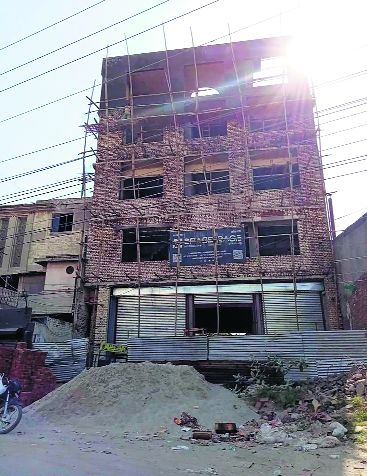 The illegal building which was sealed on Wednesday by the Municipal Corporation in Jalandhar. Tribune Photograph

The Muncipal Corporation on Wednesday sealed an illegal multi-storey building on Ladowali Road. A team of the bulding branch of the MC, led by ATP Rajinder Sharma sealed the entire building. Earlier, an upper floor of the building was sealed by the authorities concerned.

A fortnight ago, The Tribune had highlighted about gross irregularities in the said structure.

Complaint Kuldip Singh had alleged violation of building bylaws and massive corruption in complaint submitted to the MC on October 23.

He had alleged that the illegal commercial building was being constructed in violation of the laws of the Local Bodies Department. He also marked the complaint to the Chief Justice (Punjab and Haryana High Court); Lokpal; Chief Minister; Vigilance Bureau; Local Bodies Minister and Principal Secretary.

The complainant mentioned that the multi-storeyed building was being made after depositing false documents and maps. He alleged that the builder has caused massive loss to exchequer.