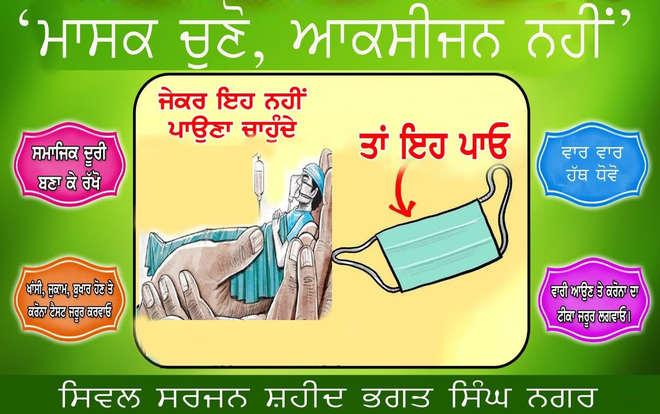 ‘Mask Chuno, oxygen nahee’, reads a poster, which was released by Nawanshahr Civil Surgeon Dr Gurdeep Singh Kapur here on Sunday. The initiative has been taken to make people of the district aware of the gravity of the Covid situation.

Also, the district is reporting a plethora of offenders on everyday basis. The poster displays a picture of a patient struggling in hospital wearing an oxygen mask and there is also a picture of a mask that the department is advising everyone to wear.

The civil surgeon has given it the name of ‘Chetavni pamphlet’ (warning pamphlet). He has been raising the concern that even if cases are being reported from the district, the people are not following the norms, they are still taking it lightly.

As he released the poster, he said that most of the people think that they cannot contract the virus as they have strong immunity, but they should also keep it in mind that they become the carrier and could infect their family members.

“Instead of remaining in hospitals, people should remain in their homes,” the Civil Surgeon said.

District Immunisation Officer Jawinderwant Singh Bains said a picture spoke a thousand words, which is why the decision to release this poster was taken. On the poster, Covid norms are also printed to educate people who still hardly follow any Covid guidelines.