College students in a fix over admission to postgrad courses 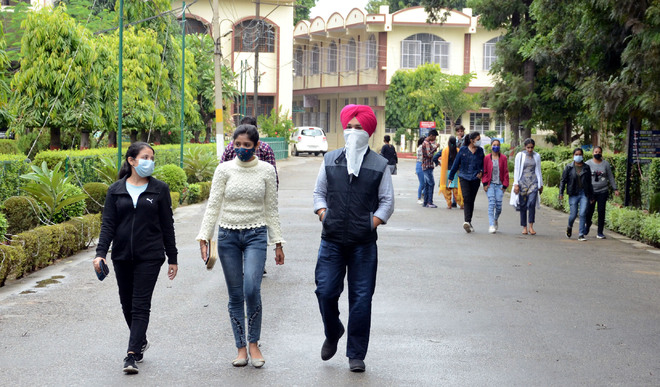 Students come out after attending regular classes at a college in Jalandhar on Friday. Sarabjit Singh

Even as the results of exit classes of the undergraduate courses are still being declared, authorities at Guru Nanak Dev University have almost shut the doors on admissions in the postgraduate courses. Any student seeking admission in MA, MCom or MSc course now, after seeing the result, will have to deposit Rs25,000 as late fee to get a seat at this stage.

While the GNDU calendar mentions that the PG admissions can be held at least 10 days after the declaration of the UG final year examination, the university authorities had this year asked the students to take provisional admission in PG courses till their results are out, but the orders were not well-received by the students of colleges in Jalandhar, Phagwara and Kapurthala, which fall under the GNDU.

Since the university does not allow students with compartments to take admission to PG courses in its colleges, the students who have been fence-sitters had been awaiting their result to take a final call. They were reportedly also worried if their result does not make them eligible for further admission, the fee required to pay might not be refunded soon and the amount could get blocked. The panicky students from Jalandhar colleges are reportedly now visiting the GNDU campus in Amritsar seeking withdrawal of the orders of Rs25K late fee.

The college authorities said while the MSc seats in most colleges had got nearly filled, majority of the seats in MA were vacant. The members of Principals’ Association who met on Friday alleged that it would be a great financial loss as well if the seats are not filled.

Principal Dr Ajay Sareen of HMV College said there were a lot of queries from the students seeking PG admissions but getting to know about the high late fee charges of the university, they were not coming forth. Principal GS Samra of Lyallpur Khalsa College, too, said admissions in all PG courses at the college had faced a big hit due to delay in examination and result of final year graduate courses. “We are in the process of writing to the GNDU to allow relaxation in the exorbitant late fee for some days,” he said.

However, the students feel they are at the receiving end because of a late decision following a conflict between the Centre and the state government over decision to take examination due to the pandemic. They said earlier the state government had announced that there would be no examinations, the UGC made it mandatory for all universities to hold it for the final year.

Upasana, a student seeking admission in a Kapurthala-based college, said, “The fight between the two governments had got dragged to the Supreme Court after which the examination could be conducted only by mid-October and results came around mid-November. Why are we being punished? How could we apply without knowing the result of our previous examination? Why should we be made to waste a year? This is injustice and GNDU must resolve the issue in the interest of the future of its students in these difficult times.”