Compared to 2017, AAP gained 8 seats in Doaba : The Tribune India 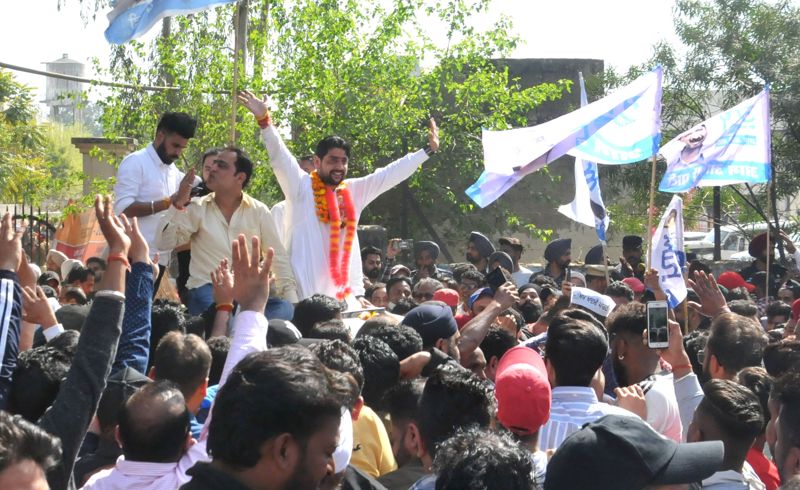 Sheetal Angural, the AAP candidate from Jalandhar West constituency, takes out a roadshow in Jalandhar on Thursday. Tribune photo

In an area where it seemed the Congress would register a sweeping win, the Aam Aadmi Party’s 10-seat win in Doaba came as a huge surprise especially amidst expectations (clearly misplaced, as it later turned out) that the Dalit factor would give a major fillip to the Congress in the Doaba belt.

On the other hand, the Congress which won 15 seats in 2017, came down to 9 in the 2022 elections. The Akali Dal, which won five seats in 2017, came down to just one seat in Doaba. Except for Kapurthala, the AAP registered big wins in every district. In Jalandhar, it won four seats followed by five in Hoshiarpur five and 1 in Nawanshahr. The 10 out of the 23 seats which AAP won in Doaba include Kartarpur, Jalandhar West, Jalandhar Central and Nakodar in Jalandhar district. In Hoshiarpur, it won five of the seven constituencies — Garhshankar, Dasuya, Sham Chaurasi and Urmur. Of the three contituencies in Nawanshahr district, AAP won one in Balachaur.

In Jalandhar, the party made massive inroads into not just the seats which it won but grabbed a massive vote share even in seats where it lost. In the Jalandhar Central, AAP managed to win by a whisker and in Jalandhr Cantt, the AAP candidate defeated stalwart Jagbir Brar. In the end, Pargat Singh managed a narrow win on the seat which was one of the most prominents not just in Doaba but also in Punjab.

While the AAP’s taking away of urban strongholds of Jalandhar Central and Jalandhar West pointed at the consolidation of Hindu votes in its favour, its massive wins in Nakodar and Kartarpur also denote increased sway in Sikh and Dalit strongholds. It wrested the Nakodar constituency away from two-time MLA Gurpartap Wadala. In Kartarpur, it defeated Congress’ Dalit patriarch Chaudhary Surinder Singh.

In the traditional BJP stronghold of Jalandhar Central, which has alternated between BJP and Congress veterans Manoranjan Kalia and Rajinder Beri, AAP’s pick Raman Arora tasted victory by a margin of just 247 votes. Arora received 33,011 votes, Beri came next with 32,764 votes and Kalia with 27,993 votes.

Even in the Jalandhar Cantt and Jalandhar North constituencies where AAP did not register wins, it received substantial votes. In the closely contested constituency of Jalandhar Cantt, which was won by Pargat Singh (who got 40,816 votes), the AAP candidate came in at a close second, receiving 35,008 votes more than the SAD and BJP candidates.