Cong all the way...clear winner in 4 civic bodies 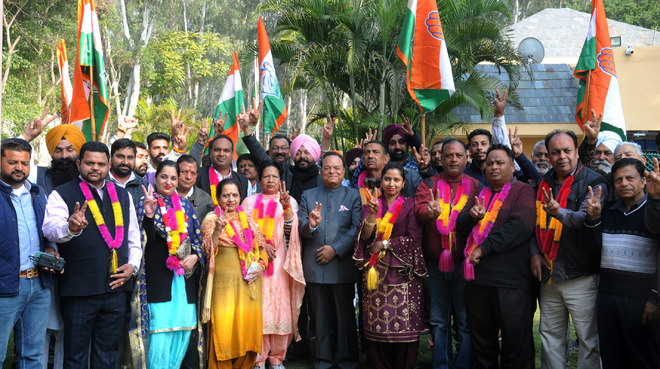 As the result for the eight Urban Local Bodies falling in Jalandhar district were declared on Wednesday, the ruling Congress got a clear-cut majority in at least four of these. The Congress won a majority by winning 11 of the 15 wards in Phillaur, 10 of 13 in Lohian Khas, 11 of 13 wards in Mehatpur and nine of 17 wards in Nakodar. In Adampur, 12 of the 13 Congress-backed candidates led by Akali rebel leader Darshan S Karwal have won the poll.

Besides Darshan Karwal, his younger brother Harjinder Karwal is also a winner. The entire Karwal group had contested on the symbol ‘tractor’. Akali Dal’s all five candidates and BJP’s all three fighting on symbol lost from here even, while a BSP candidate made it.

In 15-ward Kartarpur, six of the nine candidates that the Congress contested on symbol have won. Also, of the five other candidates, who were backed by the party but contested as Independent, have won. This makes local MLA Chaudhary Surinder Singh pretty comfortable, as he has 11 councillors by his side.

The situation in Alawalpur and Nurmahal remains dicey. The two seats can go either the Congress or the SAD way. In Alawalpur, Akali Dal won the solo seat that it contested on its symbol. Of the remaining 10, Independently winning councillors local Akali MLA Pawan Tinu claims that five are by his side making it a figure of 6 of 11 and hence a majority. However, the next few days will bring in the clear picture. In Nurmahal, too, Akali MLA Gurpartap Wadala claims to be getting a majority. No candidate of the Congress or Akali Dal had contested on a symbol on this seat.

A couple who was in the fray from the two wards of the Kartarpur MC was victorious. While former MC president Prince Arora has won on the Congress symbol from Ward No.6, his wife Jyoti Arora won as an Independent from Ward No.4. The couple deliberately chose not to contest on symbol from Ward No.4 so as to garner more votes.

BJP, SAD ON A PAR

While the Congress, which contested 65 of 110 wards from Jalandhar ULBs on its symbol, won on 47 seats, the success rate of SAD and BJP was very low. Both parties could get a single ward each. While Akalis got a lone ward in Alawalpur, BJP got it in Nurmahal. While Akalis had contested on its symbol from 25 wards, the BJP fought from 17 wards only. 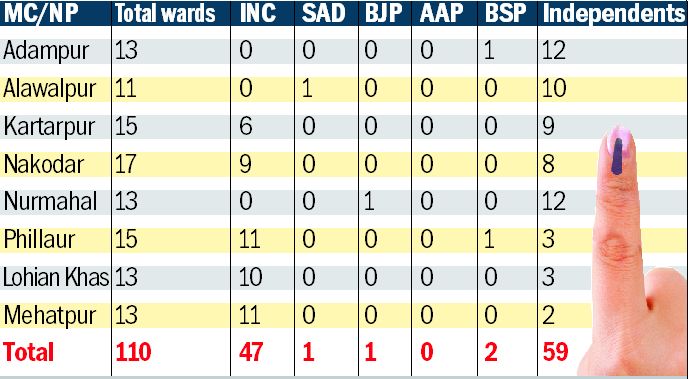 Surprisingly, in Dalit-dominated Jalandhar, the BSP candidates faired better than those of the BJP and SAD candidates. Two councillors of the BSP were elected on the party symbols. While one of them got a seat in Adampur, the other got elected from Phillaur. BSP state chief Jasvir Singh Garhi expressed delight over his party performing better this time.

Even though AAP bigwigs, including both in-charges of Punjab — Raghav Chadha and Jarnail Singh — visited Jalandhar ahead of the poll and tried to back its councillors, the party scored a duck. AAP had maximum number of candidates contesting on party symbol from Jalandhar. All 72 candidates were badly trounced.