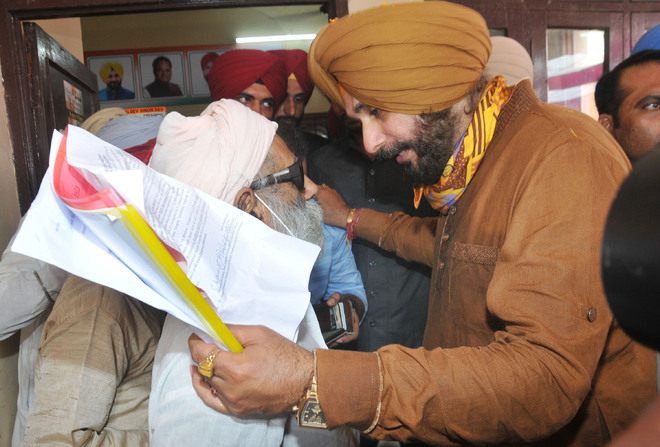 Even as the visit of the newly appointed PPCC chief Navjot Singh Sidhu to Jalandhar on Thursday was aimed at infusing freshness in the party workers, infighting came to the fore prominently during the event.

Sidhu had very clearly told the workers before starting his Assembly-level meetings that they should not come to him for petty personal issues like seeking chairmanship of a body or other demands. “Come to me like a genuine party worker aiming at the overall development of Punjab. You should all have Punjab’s progress on your mind,” he told them as it were again personal issues that remained the central issues.

Even as no Assembly-wise meetings could be held for Jalandhar owing to over-crowding, local workers had to go back home unheard. Fortunate were the Kapurthala workers whom Sidhu gave a hearing but three of the four MLAs missed the event. Kapurthala MLA Rana Gurjeet Singh, Bholath MLA Sukhpal Khaira and Sultanpur Lodhi MLA Navtej Cheema did not turn up.

In their absence, the party workers used the time to air all their grouse against the MLAs to Sidhu. Gora Gill, Bholath-based leader, reportedly told Sidhu that it was he who ensured that the entire flock of Congress stayed together and upbeat during a huge gap of over four years after Sukhpal Khaira left the party and rejoining. “So where should the people like me go now when Khaira is back. He, who spoke all ill against the CM, has been empowered again,” he fumed.

From Phagwara, even as MLA Balwinder Dhaliwal was there along with his supporters to meet Sidhu, so was the coterie of his rival and ex-minister Joginder Mann. Both leaders and their supporters reportedly gunned against each other in front of Sidhu.

Many workers from Kapurthala said only a limited number of people had been invited for the meeting. They said they kept on sending messages to Sidhu’s team and other people present inside for giving them a hearing, but they did not get a chance to be heard. Only the block presidents, councillors and office-bearers were allowed in.

Even as all MLAs and almost all party leaders of Jalandhar attended the visit of Navjot Sidhu, ex-MLA Jagbir Brar, who had contested from the Nakodar seat in 2017, remained conspicuously absent. He, however, was later seen with Finance Minister Manpreet Badal during his visit to Jalandhar and Nakodar.