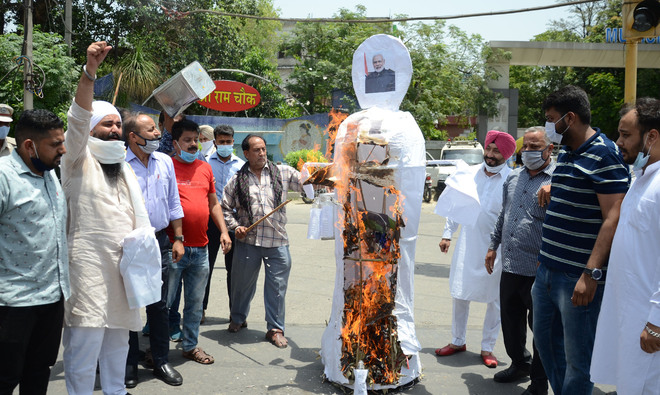 Congress leaders and workers hold a protest in Jalandhar on Wednesday. Sarabjit Singh

Holding demonstration against the BJP-led Centre upon the completion of its seven-year term, the Congress leaders today blamed it squarely for the miseries of the people by not checking the rising prices of daily need commodities.

Led by Jalandhar Central MLA Rajinder Beri, the Congress leaders and workers said the prices of petrol, diesel, mustard oil, refined oil and pulses had been increasing steadily while the government was taking no steps to control the inflation. The party leaders said the Centre had only worked to ensure that the industrial bigwigs such as Adanis and Ambanis did not suffer any losses while caring two hoots for the poor man who was not even able to afford a two square meal.