15 challans issued in past 2 days, 7 for overspeeding 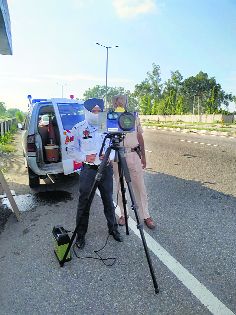 The city traffic police are keeping a close watch on speed limit violators with the help of speedometers. Besides, challans are also being issued to those not wearing masks or seat belts.

Special checkpoints have been set up at several points including PAP, Pathankot Bypass, Suranussi and others. ASI Kamaljit Singh, who supervises the speedometer operations, said high-resolution images of vehicles not abiding by rules appear on the screen of the speedometer and the vehicle numbers are captured. In the past two days, around 15 challans have been issued for several offences, including violation of speed limit (7) and for not wearing face masks and seat belts, said Kamaljit.

The technical operator of the machine said if a vehicle breaches the speed limit, the system automatically clicks its photograph as evidence. “Earlier, in the absence of proper and effective speed radars, violators were getting away from the punishment,” the operator said.

After a long wait, two well-equipped speed radars were received by the city traffic police in July last year. As per information, the district traffic authorities earlier used to get radars for short intervals. However, those were also not effective in checking speed limit violations. Kamaljit said: “The functioning of speedometers sometimes gets interrupted due to technical faults. Recently, we got it repaired from a Delhi-based company.”

As per the traffic police, the speed limit for cars has been fixed at 90 km/h, for two-wheelers at 60 km/h and for heavy commercial vehicles at 65 km/h.