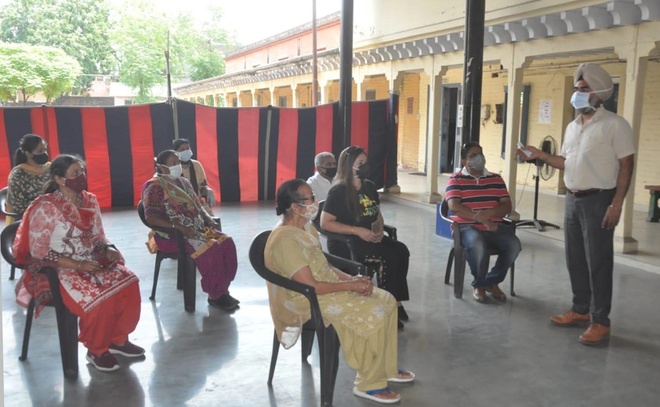 An official guides people before vaccination in Jalandhar.

In order to tackle Covid-19, the Jalandhar Commissionerate Police, have started inoculating civilians at the Police Hospital. Police Commissioner Gurpreet Singh Bhullar said earlier, the police personnel (frontline warriors) were being administered vaccine at the hospital.

He said as the cases surged, the Jalandhar Commissionerate Police realised its responsibility towards people and opened the hospital for residents. Bhullar said beneficiaries were getting them inoculated at the hospital.

The Police Commissioner said apart from maintaining law and order in the district, cops were going all out to give a healing touch to people.

He said, a total of 3,168 persons have been vaccinated at the hospital, out of which, 789 were police personnel, 143 were their family members and 2,236 were civilians.

DCP Gurmeet Singh has been given overall charge of this camp. Since March last year, the Jalandhar Commissionerate Police has distributed 5.73 lakh packets of dry ration and 44,932 packets of cooked food to the needy and underprivileged persons.

The police have registered 2002 FIRs for violating curfew/ lockdown norms and collected around Rs 4.50 crore from violators. Welcoming the initiative, Usha, a resident of Ladowali road, said this step enabled her to to get vaccinated near her home. She said due to old age, , it was difficult for her to get vaccinated at a distant place.