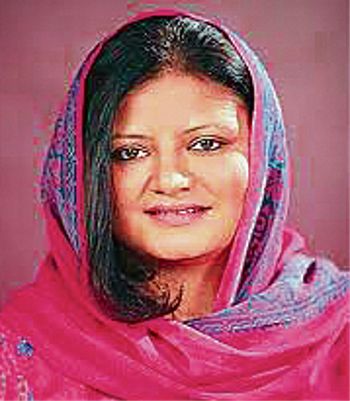 After being denied Congress ticket from the Garhshankar constituency, aspiring candidates in the segment have revolted against the party. Ticket aspirant Nimisha Mehta on Sunday joined the BJP in the presence of BJP state president Ashwani Sharma. Former MLA Love Kumar Goldie will be joining Punjab Lok Congress (PLC) on Monday morning. However, it is not yet clear that in whose account the Garhshankar seat will go in the BJP-PLC alliance.

After declaration of Amarpreet Singh Lali as Congress candidate, a large number of workers gathered at the residence of Congress leader Nimisha Mehta late last evening. She said the Congress party has taken a wrong decision by choosing a person who came in the month of October and put up some posters, roamed among the people for 15 days and got the ticket. She alleged that Ambika Soni and Krishna Allavaru supported their flatterers. Sunil Jakhar has lost his support base. After this, Nimisha Mehta joined the BJP late on Sunday evening. This is a major setback for the Congress in Garhshankar.

On the other hand, former Garhshankar MLA Love Kumar Goldie, who had won on the Congress ticket from Garhshankar twice, has decided to join the PLC. He will be joining the party tomorrow. Former MLA Love Kumar Goldie said the survey went in his favour but the party cheated the Congress workers by giving ticket to someone else. That’s why he has decided to contest the election.