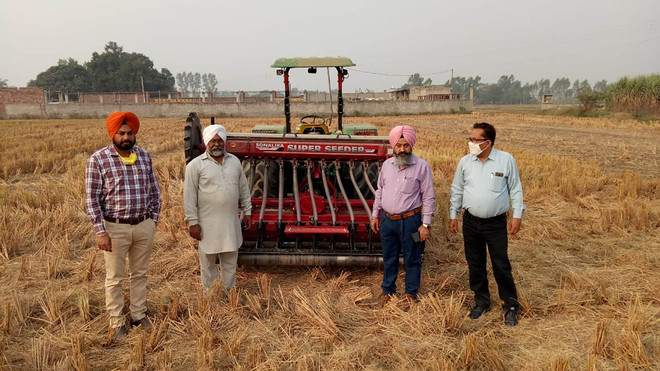 The superseeder machinery being used by farmers in Jalandhar. Tribune photo

Keeping in mind the hazard posed by the stubble burning, a crop residue management scheme was launched three years ago by the Centre. The Ministry of Agriculture and Farmers Welfare had launched‘Promotion of Agricultural Mechanisation for In-Situ Management of Crop Residue in the State of Punjab, Haryana, and Uttar Pradesh & NCT of Delhi’ for in-situ management of crop residue.

Various equipment and machines such as super straw management, system (SMS) attached with existing combine harvester, happy seeder, mulcher, rotary slasher, reversible plough, super seeder, baler and rakes, crop reapers, etc. are developed and are given to the farmers under this scheme. While individual farmers get a subsidy of 50 per cent or Rs 87,000 (maximum), a group of farmers get a subsidy of 80 percent on the purchase of such equipment. For eg: The cost of the superseeder machine is Rs 2, 05,000, of which 1, 57,000 will be paid by the department and remaining will be paid by the group.

Objective of the scheme

Also, it was for the first time last year that the panchayats were allowed to directly apply with the department to get machines to manage crop residue and then sublet it to farmers at affordable rates. Until now, 13 panchayats have applied for the same.

While the official data shows that more farmers and farmer groups have been purchasing the machines, some farmers don’t really appreciate the scheme as they say that small farmers fail to benefit much from the scheme. 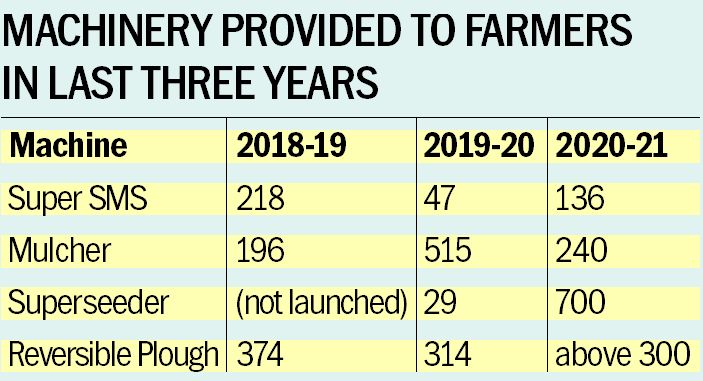 Tarsem Singh, one of the farmers from Jalandhar said, he had once brought a rotavator but the company gave it at a high price. “The machines are costly and I did not dare to buy another one again,” he said.

Kulwant Singh Sandhu, a farmer leader from Rurkan Kalan village, said, “A small and marginal farmers cannot purchase these. Even if someone gets it on subsidy, the company increases the price of the machines accordingly, which eventually cost the farmer very high.”

While another farmer Sukhwant Singh, however, said he had been using the machines for the past two years and was satisfied with the benefits.

Dr Surinder Singh, Chief Agriculture Officer, said more and more farmer groups and societies were coming forward and were motivated to use the machines. “Also, we don’t advise small and marginal farmers to purchase the machines, we instead ask them to buy it from farmer groups, panchayats and societies. It will be beneficial for them. Now, even the stubble burning incidents have witnessed a fall. I am sure, in coming days, few incidents which were reported earlier will not happen anymore,” he said.