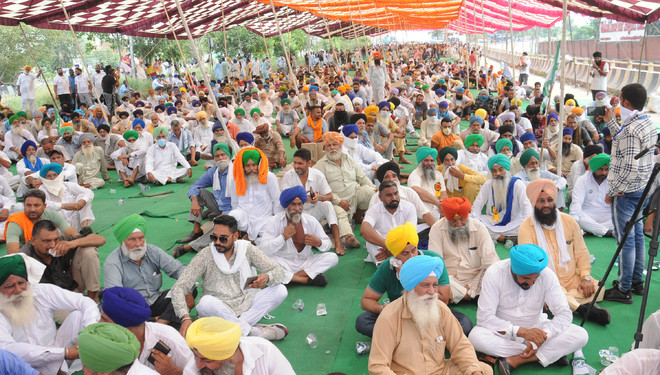 Around 15,000-20,000 farmers of 11 different farm unions on Tuesday blocked the Delhi-Amritsar National Highway for over two hours here. Demanding immediate withdrawal of the three agricultural ordinances introduced by the Central Government, they assembled on the national highway in Phagwara. Vehicular traffic remained suspended till the protest was lifted. A large number of policemen were deployed on the road. They diverted the traffic.

Apparently, the passing of a resolution to reject these ordinances in the Punjab Assembly on August 28 and Capt Amarinder Singh declaring the ordinances against the interests of the farmers, landless workers and the state agriculture marketing system only added fuel to the farmers’ anger.

The protesters threatened that if the ordinances were passed in Parliament, they would launch “Delhi Chalo” campaign. Manjit Singh, president, Doaba Kisan Union, said the government had forced them to hit the roads. “The government is trying to destroy the agriculture sector which is already plagued by anti-farmer policies. If the ordinances are passed, we would also ban the entry of local ministers to our villages and would boycott the elections.”

Similarly, another member of the union, said they would also oppose the Electricity (Amendment) Bill as it would adversely hit free power to farmers.