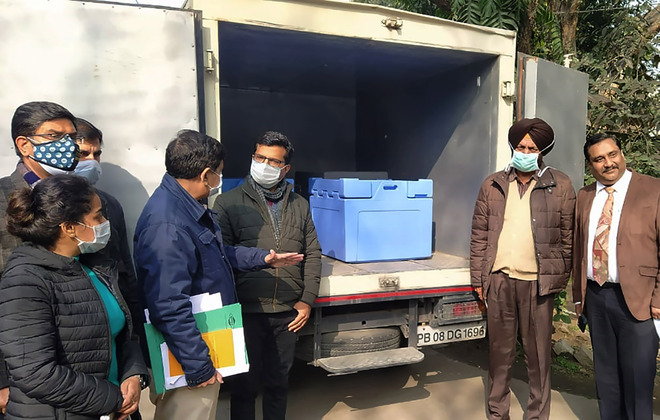 Gearing up for the mammoth inoculation drive in the district on January 16, Deputy Commissioner Ghanshyam Thori on Thursday reviewed the preparedness to vaccinate as many as 11,800 frontline healthcare workers in the district in the first phase.

As many as 16,490 doses of the Covid vaccine also arrived in the district on Thursday, which had been stored at the Civil Hospital.

The DC said the district administration had planned vaccination at as many as 29 sites in the district. The sites would be different CHCs, PHCs, the district hospital, sub-divisional hospitals, and some private hospitals. The DC said a total of 57 cold chain points, with a storing capacity of over 12 lakh vaccines, had been set up. Of them, 11 points (eight in rural and three in urban areas) would be utilised to store the first slot of vaccine.

Thori said after 28 days of the first dose, the second one would be administered to the listed healthcare workers and for which, an elaborate mechanism had been evolved to ensure a smooth vaccination drive. He said a total of 31 health teams would be administering vaccines across all 29 session sites and each team would have a target to vaccinate 100 beneficiaries per day, which would mean as many as 2,900 beneficiaries daily, he added.

Giving information about the storage capacity and preparedness, the Deputy Commissioner said the district administration had created enough space to store over 12 lakh vaccines with all points linked with cooling features to maintain the required temperature for the vaccine.

District Immunisation Officer Dr Rakesh Chopra said the number of sites where vaccines would be administered would be expanded by Monday but on the first day (January 16) it would start from three sites.

Jalandhar: With 34 more cases, the Covid tally reached 20,283 in the district on Thursday. The number of deceased persons in Jalandhar rose to 654 with one more death. So far, there are 249 active cases, 19,380 people have been discharged, while 142 people are under home isolation in Jalandhar. Meanwhile, Kapurthala district saw 11 persons testing positive for coronavirus on Thursday.

With a considerate decline in new Covid cases, just one patient tested positive out of 281 samples reported in Hoshiarpur on Thursday. With it, the number of total positive patients has increased to 7,907. No new death was reported on Thursday, so the toll remained at 323. With 1,113 new samples taken on Thursday from people with suspected flu-like symptoms, the total number of samples taken in the district till date has reached 2,58,935. According to reports received from the lab, 2,50,059 were negative, while 2,603 reports were still awaited, 184 were invalid. The number of active cases is 78, while the number of patients who have recovered is 7,506. Civil Surgeon Dr Ranjit Singh said there was no positive patient in Hoshiarpur city and only one patient belonging to another health block of the district tested positive. OC