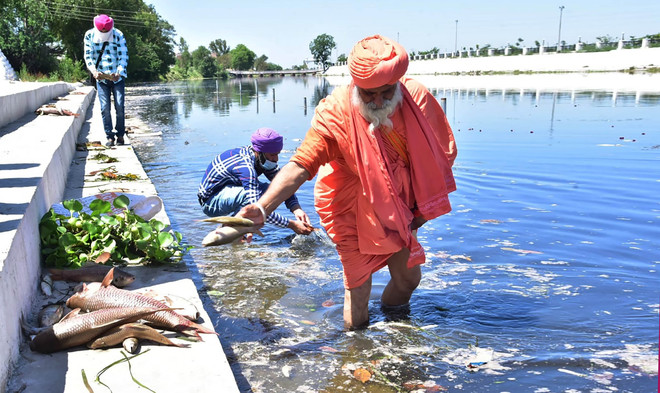 Environmentalist Balbir Singh Seechewal, along with sewadars, take out dead fish from the polluted waters of the Kali Bein at Sultanpur Lodhi. Tribune Photo

The issue of the alarming mass deaths of fish at the Kali Bein in Sultanpur Lodhi was taken up by environmentalist Balbir Singh Seechewal at an NGT meeting. Amidst administrational apathy, fish continue to die in the Kali Bein. The number of the fish is so large that they have had to be dug out with JCB and excavators by sewadars. . The environmentalist said for years the polluted waters falling into the Kali Bein had been a cause for concern. The clean water flow is stopped every year during Baisakhi in view of repairs, but the polluted waters from the colony known as Bhalane Dian Colonian and the Kapurthala city sewage waters continue to fall into the Bein. The flow of these waters Seechewal said hasn’t been stopped even after 21 years of kar sewa. He said the fish deaths indicative of serious trouble in the waters of the Bein had failed to generate a response as would have been expected ideally in such an alarming situation. He said while government had decided to release 250 cusecs of water into the Bein, every year during repairs, this flow of water is stopped while the polluted waters continue to pour in choking thousands and millions of the aquatic organisms in the holy water body. Notably, the previous occasion such similar deaths took place were in 2012, 2013, 2015 and 2017. 2021 is the fifth year that deaths had taken place.

Amid a sombre Covid scenario everywhere, Kapurthala village Nangal Lubana has turned the tide of the Covid scenario. From 70% last year the village’s positivity rate is down to 1%. Those coming fore to get vaccinated include 90 to 95-year-old elderly women. As many as 1,213 persons above the age of 45 years were vaccinated at the Nangal Lubana village in Kapurthala – which comprises 90.2% of those over 45 years of age. The largest village in Begowal with a population of 5,234, the village has 1,334 beneficiaries above the age of 45 years, of whom 1,213 got vaccinated. Notably, the village saw a rough 2020 where in the first wave the village saw a 70% positivity rate. Of the 835 positive cases in Bholath subdivision, 83 were from Nangal Lubana – which was 10% of the sub division. Four people from the village also lost their lives to Covid. With regular testing and vaccination the positivity rate in the village has come down to 1 per cent. Presently, none of the village residents are in hospital or home isolation. Of those vaccinated at the village include 95-year-old Kartar Kaur and 91-year-old Kartar Kaur. Aparna Banerjee