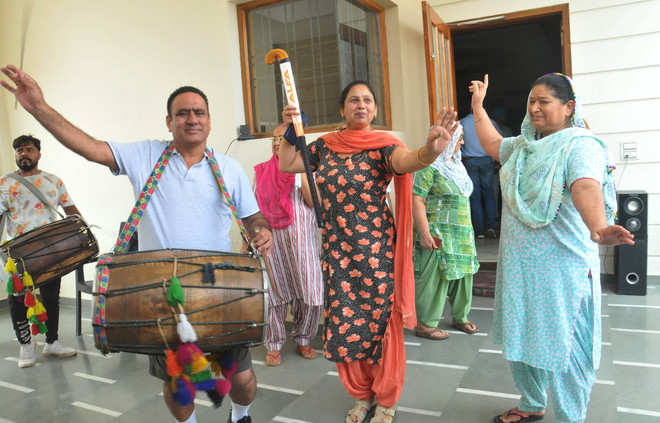 Mandeep’s family members dance to the beats of the dhol at Mithapur village in Jalandhar.

“A medal in his first Olympics, we are elated!” Nothing else can sum up the mood at Mandeep Singh’s house better. Dhol beats haven’t stopped reverberating in his house since early morning. Everyone has tried their hand at Bhangra, even the most solemn of village men.

“Can’t tell you how happy we are. We have tears of joy,” says an elated father Ravinder Singh.

As a steady stream of mediapersons flood their home, parents flit from one house to another — getting hugs and nibbling on a never-ending supply of laddoos.

Ravinder says: “My cousins and I are so happy. My son has become an Olympian. He has brought a medal in his first Olympics.” For mother Davinderjit Kaur, all her dreams have come true.

Mandeep’s brother Harminder, 32, who casually lounges with player Talwinder Singh, has played hockey in his youth.

His uncle Surinder Pal Singh Ghugga, 72, played for East Bengal, while his son Balwinder Singh is a village hockey coach. Between the family, there are 10 people, including elders and cousins, who have pursued hockey at point in their lives.

Ravinder plans to go to Amritsar to receive Mandeep and pay obeisance at the Darbar Sahib. “After he returns, all relatives will gather. He will go to the village ground, from where he started his hockey journey, to pay tribute. He was extremely emotional during our conversation today. Could barely talk.”