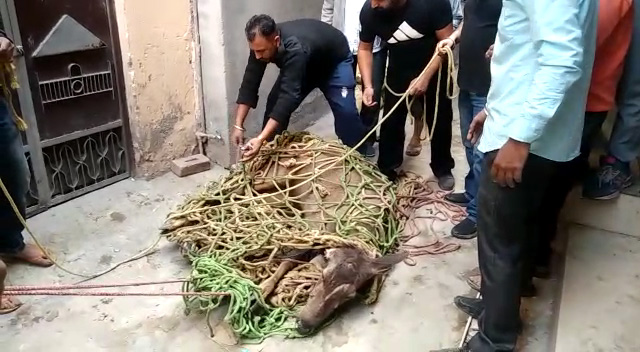 A wildlife team rescues a sambhar that strayed into the Rainak Bazar area on Sunday. Tribune photo

In a first, a sambhar strayed into the congested Rainak Bazar area of Jalandhar this morning, causing a commotion among residents. The sambhar stayed in the area for over three-and-a-half hour and was rescued with the efforts of Ward No.50 councillor Paramjit Singh and a team of the Forest Department team.

Animals are frequently straying into inhabited areas. Earlier they came in from hills. But now sugarcane fields and dense bushes have emerged as new habitats for deer from where they stray into residential areas. Jaswant Singh, Forest Range officer

Paramjit Singh said, “The children of the mohalla called me around 9 am that a sambhar had strayed into the area. The animal was very scared as it had been chased and bitten by stray dogs. It lay tired in the street. A dog had injured him in the fight. We immidiately called up the Forest Department. A team of wildlife officials came in with nets and other equipment. I along with 13 to 15 local youths as well as two Forest Department officals worked to rescue the sambhar. Three boys were hurt in the process. I also received minor injuries on the leg, but, to our delight, the deer was sucessfully rescued eventually. We thank the forest officials for reaching on time and saving the animal.”

Paramjit Singh, popular as Sherry Chadha in the area, said it was a young sambhar that weighed 3.5 quintals. It took 15 to 20 persons to lift the deer into the vehicle.

Forest Department officials said it was the twelfth sambhar they had rescued this season in Jalandhar district and the third one today only.

Range Officer Jaswant Singh said, “We have rescued 10 to 12 sambhars since November. With the change in weather, animals are frequently straying into inhabited areas. There is also a change in habitats. Earlier they came in form the hills. But now little forests, or sugarcane fields or a thicket with dense bushes have emerged as local habitats for the animals from where they stray into residential areas.

The sambhar was released into the forest shortly after the rescue.”