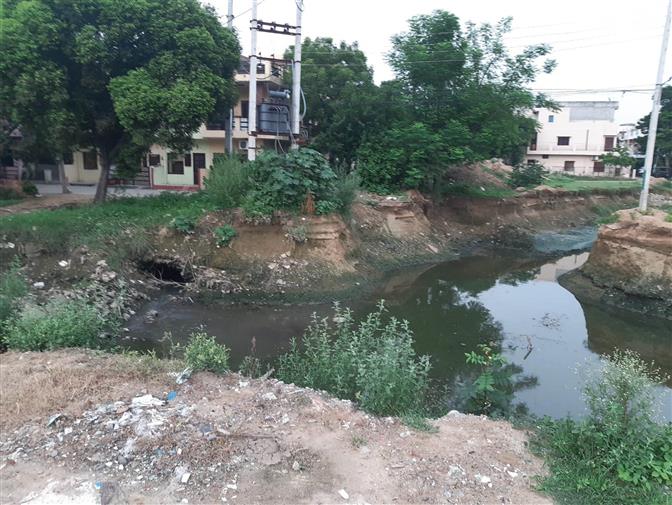 The site for a railway underbrige at Urban Estate-I, Jalandhar

Notwithstanding the inconvenience to residents of Urban Estate Phase-I, Punjabi Avenue and adjoining areas, the authorities concerned have done little to start the construction work of dual carriage railway underbridge at Urban Estate Phase-I, the foundation stone of which was laid by then CM Charanjit Singh Channi in December last year.

Residents of Urban Estate Phase-I and Punjabi Avenue claimed that excavation work on the site started in February, and during excavation, sewage pipes were damaged due to which the site has turned into a pool of dirty water, making their lives miserable.

We have received the payment from the MC and the work to shift the electricity transformer and the pole from the site has started. A meeting called by the MC Commissioner was cancelled this week. Whenever the next meeting takes place, all issues will be discussed. —Inderpal Singh, PSPCL Deputy Chief Engineer, Jalandhar Circle

Aware of problems; Meeting next week

They alleged officials of the Railways, Municipal Corporation and the Electricity Department had visited the site twice in the past six months, but had been passing the buck on each other over the delay and none was ready to take the responsibility.

Speaking to Jalandhar Tribune, Banwari Lal Shastri, a priest in the temple that is in front of the site, said the previous government had approved the Rs 16 crore underbridge project. However, the project hadn’t seen the light of day yet.

He alleged the MC started the excavation work without having intimidated the Electricity Department to shift the transformer and electricity pole that is installed on the site, and now when sewage pipes have been damaged, the MC is putting the blame on the latter for the delay.

Shastri further added that many accidents have taken place on the spot as the entire area lied in a pathetic condition. “Besides, many stray animals, including cattle and dogs, have fallen into the pit. On many occasion, especially during night even commuters fail to discover the large pit or their vehicles get unbalanced on the uneven surface,” he said, adding people were not able to visit to the temple, and were facing a lot of inconvenience due to the delay in project.

Advocate Sanjeev Sharma, who has filed a case against MC under Section 133 of the CrPC for causing nuisance to public, said: “It has become an impossible task for residents to cross the stretch as foul smell emanating from the site had made their lives hell. Besides, no one is ready to take the responsibility, and blaming each other for the delay.

Sources in the MC informed that the payment to shift the electricity transformer and electricity pole from the site had been made to the Electricity Department recently, and the work has been started.

Mayor Jagdish Raja said, “A meeting of the Railways, Electricity Department and the PWD has been called next week. We are aware of the problems faced by residents. We promise that the work will be given top priority now.”

He said the MC had made the payment to the Electricity Department to shift the electricity transformer and a pole and it had started the work.