Of these, 24 are Jalandhar residents, while the rest are from other districts 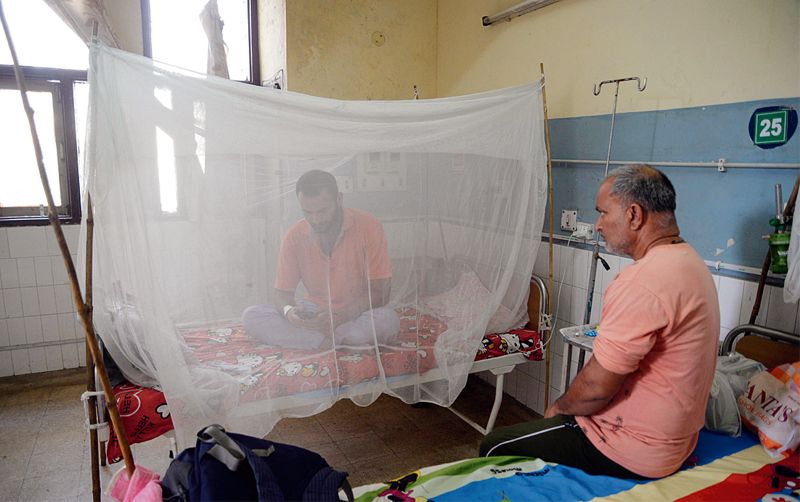 The number of dengue cases reported in Jalandhar has risen to 31. Of these, as many as 24 are Jalandhar residents, while the rest are from other districts.

We are carrying out surveys of at least 150 houses per day barring Saturday every week. Many houses have already been checked and dengue larvae destroyed. More checks are being conducted daily. Dr Aditya Paul, District Epidemiologist

While the early monsoon months until August did not see major dengue cases, a steep rise has been registered in September, especially in the fag end of the month. Until September 17, there were only nine dengue cases in Jalandhar, an additional 22 were reported in the last one week.

Of the 22 recent cases, as many as 15 are from Jalandhar, while the remaining seven are from Hoshiarpur, Kapurthala and Fatehgarh.

Of the 15 Jalandhar cases, eight are from urban areas including Jagatpura Mohalla, Basti Danishmandan, Panj Peer Colony, Gopal Nagar, Basti Sheikh, Raseela Nagar and Gobind Nagar (near Sodal), while the remaining are from rural areas, including Phillaur (2), Noorpur (Bulanpur Colony) (1), Kadianwali (1), Pandori Khas (Nakodar) (1), Nagar Fatak (1) and Nangal Shahpur (1). Also, four of the total cases were from Civil Hospital Jalandhar, while the remaining were suspected dengue cases that came from PIMS and private hospitals.

Of the first nine Jalandhar residents who tested positive for dengue, six were reported at DMC Ludhiana and were notified to Jalandhar Health Department. The remaining three were reported at Civil Hospital Jalandhar, Sacred Heart Hospital and PIMS. In these three, dengue was reported in a 7-year-old-boy, a resident of Gandhra; a 49 year old woman of Bachint Nagar; and a 59-year-old man from Rishi Nagar in Jalandhar.

Notably, almost all persons that tested positive in urban areas of the district were from semi-slum areas.

District Epidemiologist Dr Aditya Paul said: “As many as 22 samples tested positive for dengue at the Civil Hospital recently, of which 15 are from Jalandhar. The health teams have visited the homes of patients who tested positive. The larvae from the house of one of the Gobind Nagar patients were found in a cooler. Water was drained and the cooler was cleaned. A majority of dengue larvae were found from coolers and pots. We are carrying out surveys of at least 150 houses per day barring Saturday every week. Many houses have already been checked and dengue larvae destroyed. More checks are being conducted daily.”

Epidemiologist Dr Shobhna said: “The breeding period of dengue culminates these days, so there is an expected rise in cases. We are carrying out stringent checks and surveys in residential areas daily.”

Health teams have also been inspecting and surveying residential areas, police stations, offices etc. and spraying insecticides on the premises where accumulated water is being seen.

This Friday, 193 homes were inspected in Jalandhar. Health officials have been divided into two to three teams and they are visiting homes daily.