Get assurance of meeting with DC today 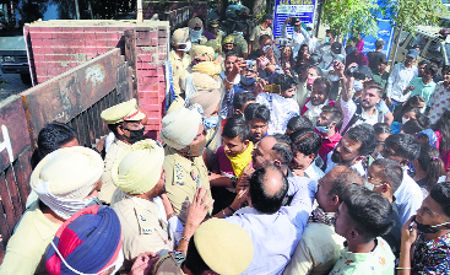 Nearly 100 SC students on Monday lodged a protest outside the DC office and even blocked the BMC Chowk over their demand for intervention of the administration regarding their stuck-up admissions for the new session in the local colleges.

The students accompanied by some Dalit activists gathered outside the DC office at around 11.30 am and sat on a dharna in front of the main gate raising slogans against the state government and the administration. The students said all local colleges had withheld free admissions for them saying that there was no clarity on whether they would be refunded the fee. The students asked the administration to come to their aid and help them continue their higher studies.

Student activists, who led the protest, were Randeep Singh, Deepak Bali and Navdeep Dakoha. The students also got the support of Sukhwinder Kotli of the Bahujan Front, Punjab, AAP leaders Darshan Bhagat and Balwant Bhatia and members of the Guru Ravidass Front and the Bhagwan Balmik Tiger Force

The students demanded that they might be allowed to enter the premises and meet Deputy Commissioner Ghanshyam Thori. SDM Jai Inder Singh and ADC Jasvir Singh sat in the meeting but the DC stayed back. Waiting for the DC for some time and not getting any assurance about his arrival, they finally came out and sat on a dharna at the BMC Chowk. They blocked the six connecting roads at the intersection for about 40 minutes till Deputy Commissioner of Police Balkar Singh came up to them and assured that a meeting would be arranged with the DC tomorrow at 11 am.

The activists said a Joint Action Committee of colleges had declared that all 1,650 colleges would not permit free admission to the Dalit students which was not acceptable to them and that the government and administrative interference was needed for them at this crucial juncture when just 11 days were left for admissions to most of the colleges.