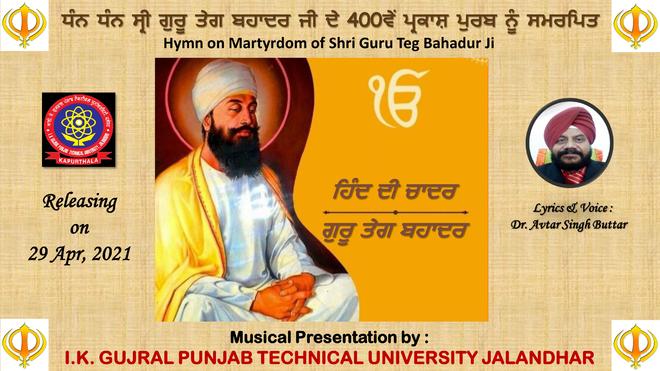 The senior faculty of Electronics Department Prof Avtar Singh Buttar initiated this job out of his educational teaching track. In this devotional song, Prof Buttar depicted the importance of the Guru’s life and martyrdom. The lyrics and the background music of this religious song dedicated to Guru Teg Bahadur Sahib were also performed by Prof Buttar.

He spoke about the life of the Guru and congratulated Prof Buttar on this initiative. VC Dr Sharma said that such religious songs are a source of inspiration for our new generation for religious, spiritual and communal unity.

It is worth to mention that in this religious devotional song, important topics related to the life of Guru Tegh Bahadur such as the discovery of the ninth guru by Makhan Shah Lubana at Baba Bakala, Guru Simran, Aurangzeb’s religious intolerance and Kashmiri Pandits’ appeal to Guru Sahib, Guru Sahib’s martyrdom are also penned by Prof Buttar. The Sikh martyrdom tradition includes details up to the Khalsa Sajna after the martyrdom of Guru Sahib are also a part of the song.