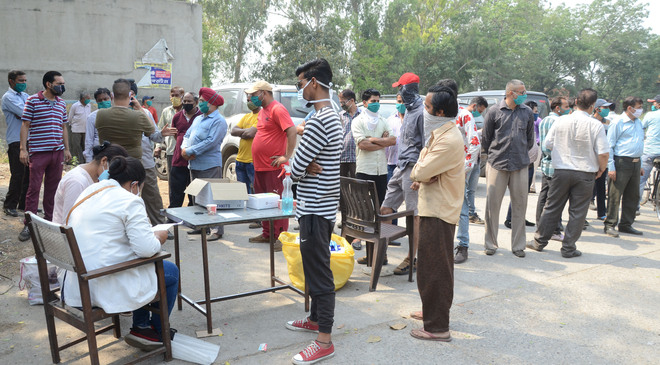 Vendors wait for their turn at the entry gate of the sabzi mandi in Jalandhar on Tuesday. Sarabjit Singh

Witnessing a massive rush in vegetable markets on Monday, the administrations of all the districts of Doaba on Tuesday tried to regulate the movement and deployed police personnel to get the Covid-19 protocols implemented.

Random Covid-19 testing was started at vegetable market in Maqsudan today where staff from the Health Department took samples (RT-PCR tests) of vendors entering the mandi.

Cops at Maqsudan mandi restricted general public from entering the main mandi and allowed only vegetable and fruit vendors to enter the market. Officials said only wholesale operations would be allowed in the market and no retail business as restrictions would help check rush and keep a control on spread of the virus. Owing to new curbs and checks, the rush in the market remained relatively much controlled today.

Jai Inder Singh, SDM, Jalandhar-1, visited Mandi Phantom Ganj (wholesale market for grocery items). The SDM held meetings with the market association and convinced them to ensure that there would not be more than three customers at a time. He asked them to mark circles outside their shops where consumers could stand. Even vehicular movement in the wholesale market area has been restricted to ensure that there’s no crowding.

The Kapurthala administration has started testing people for Covid-19 in vegetable markets in the district. Special camps have been set up in mandis to tackle the pandemic.

During the RT-PCR sampling at a camp at sabzi mandi on Hoshiarpur road in Phagwara, 11 people tested positive.

Phagwara SMO Dr Kishore Kumar said a total of 80 samples were collected, out of which 11 were found positive. Contact tracing of the positive cases has started, besides isolating them.

“Officials of the Mandi Board have been asked to cooperate and meet arhtiyas and shopkeepers to prevent further spread of the virus,” he said.

The DC today visited the vegetable market at Phagwara and directed to take stern action against violators. She also visited the testing centre at Sarai road near the bus stand.

The DC said to facilitate public and vendors, option for home delivery has been allowed till 9 pm in the district.

The duo also visited Covid sampling camps at sabzi mandi in Phagwara and said tests should be carried out on daily basis.

The SSP has constituted special teams for continuous patrolling in congested areas to ensure the implementation of the Covid guidelines.

She said strict action was being taken against those who were found roaming without any reason.