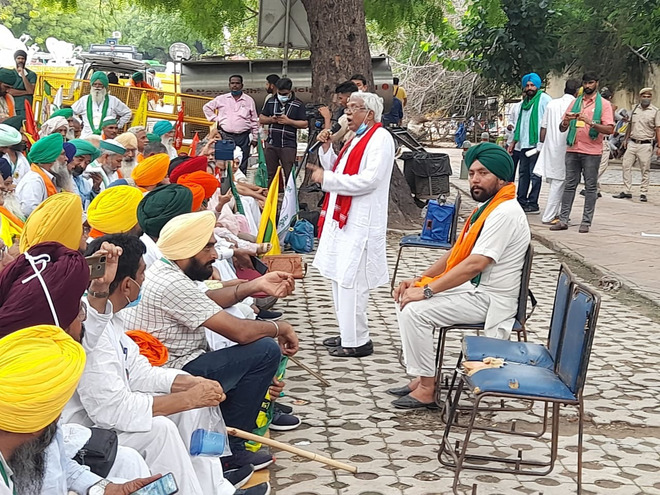 Manjit Singh Rai (in green turban) during a ‘Kisan Sansad’ in Delhi.

The ‘Kisan Sansad’ being held at Jantar Mantar, near Parliament, where the Monsoon session is underway, has been witnessing active participation of farmers from the Doaba region.

Manjit Singh Rai from Hoshiarpur played the role of deputy speaker on the first day of the ‘Kisan Sansad’. Langar service daily at the sansad was being managed by Davinder Singh, vice-president, Bhartiya Kisan Union (Doaba), who hails from from Nawanshahr.

He said the motive of holding the sansad is that they want to give a message that the farmers don’t only know about farming, but also about what happens in the Parliament. “We have been criticised by a certain section, but we aren’t going to stop no matter what,” Singh said.

He doesn’t remember when he had a sound sleep. “I don’t even remember how many days I have not seen my family. even when I go home, I am on my mobile phone or making some plans and future strategies,” he said.

“I have a 10-year-old son. He used to ask me why I do not come home often. But when the protest started, I took him with me and he also gave a speech there. Due to my routine, he has come to know that I am fighting for our rights, but he still misses me,” he added. When the protests were taking place at Behram toll plaza, Davinder along with other farmers would gather and start their speeches.