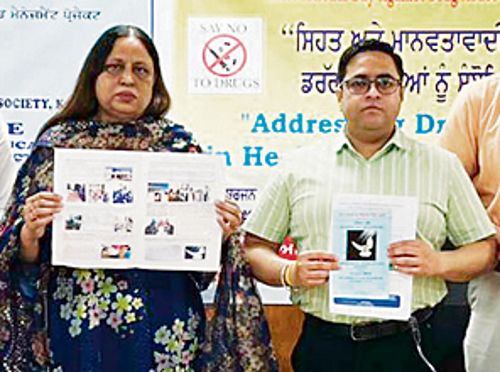 Jalandhar: Kapurthala DC Vishesh Sarangal on Monday launched drug de-addiction and rehabilitation programme “DOVE” to mark World Anti-Drug and Drug Trafficking Day at the DAC in Kapurthala. The Drug Overdose Education and Management Project (DOVE) will facilitate drug de-addiction and rehabilitation of those who want to shun drugs. While launching the programme, the DC said drug addiction had taken a serious turn all over the world, especially among youth, but Punjab was one of the states which was known for producing greenery in barren lands at home and abroad. TNS

Phagwara: Lohian Khas police have arrested three drug peddlers on the charge of selling poppy husk. Investigating officer (IO) Sawindar Singh said the accused had been identified as Mangal Singh, alias Mangali, his brother Tarsem Singh and nephew Gurpreet Singh, alias Gopi, residents of Mandala Chhana village. The investigating officer said 3-kg poppy husk was recovered from the possession of Mangal Singh who confessed that he had purchased the contraband from his brother and nephew for Rs 4,000 per kilogram. A case under Sections 15, 61 and 85 of the NDPS Act has been registered against the accused and Sections 29, 61 and 85 of the Act were added to the FIR. OC

Lohian: Lohian Khas police have arrested three members of a drug peddlers’ family on the charge of attacking a police team on Sunday night. SHO Sukhdev Singh said the accused have been identified as Tarsem Singh, alias Shami, a resident of Mandala Chhana village, and his sons Gurpreet Singh and Sukhjit Singh. The SHO said an arrested drug peddler had confessed that he purchased poppy husk from the accused and when the police raided their house, the accused attacked the police team. A case under Sections 332, 353, 186, 506 and 34 of the IPC has been registered. OC

Phagwara: Nakodar Sadar police have arrested a Jalandhar resident on the charge of smuggling country-made liquor. Investigating officer Sukhwant Singh said 20 bottles of liquor were seized from the possession of the accused, identified as Sandip Kumar, of Aabad Pura locality in Jalandhar. A case under Sections 61, 1 and 14 of the Excise Act has been registered against the accused who was released on bail later. OC

Phagwara: Phagwara police arrested a person with 20 gm of heroin on Sunday night. He was identified as Chamandeep, a resident of Hamirpur in Himachal Pardesh. SHO (City) Amandeep said the accused was nabbed at a checkpoint near Varinder Park.