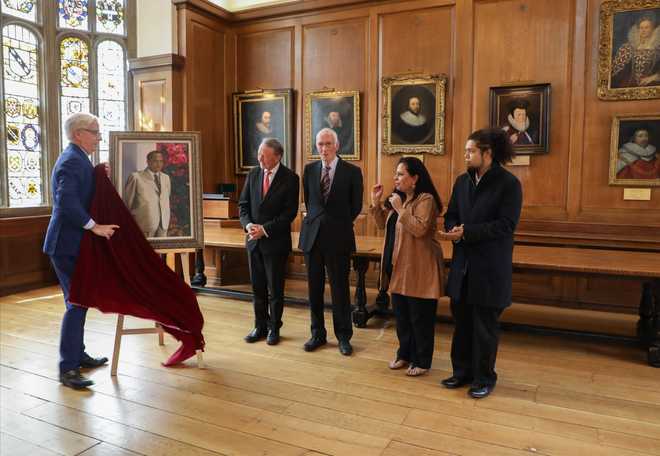 Dr BR Ambedkar became the first Indian with a room dedicated to him at the Gray’s Inn, London. The Gray’s Inn is one of the four Inns of Court in London with an illustrious list of jurists, judges and barristers such as Francis Bacon, Baron Slynn, Lord Bingham of Cornhill and others having been its members.

An institution unique to Britain

Dr BR Ambedkar is the first person of the Indian origin and the very second jurist in the world to have a room dedicated to him at the Gray’s Inn. The Inn, previously had a room dedicated to Rose Heilbron, England’s first woman queen counsel and judge.

The historic development is the result of the efforts of human rights and equality campaigner Santosh Dass — an ex-civil servant and a woman of Punjabi origin. Hailing from Hamirowal village in Nawanshahr, Dass has been a relentless rights activist and the campaigner against caste-based discrimination. She was also the key person behind the proposal to the Indian government to make Ambedkar House in London a memorial.

The room dedicated to Dr Ambedkar is a direct result of discussions since 2018 between Santosh Dass MBE, president of the Federation of Ambedkarite and Buddhist Organisations (FABO) UK and Brigadier Anthony Harking OBE, Under Treasurer, at the Inn. Unveiled by Master Ali Malek QC, Master Treasurer, Gray’s Inn, it will be used by barristers in training and as a meeting room. A portrait of Dr Ambedkar donated by FABO UK was also unveiled on the occasion.

Santosh Dass, said: “This is a great honour for all Ambedkarites around the world. I am confident that the new Ambedkar Room and the portrait donated by the FABO UK will arouse the curiosity of legal students who will get a chance to learn about Dr Ambedkar’s accomplishments. It is a wonderful feeling to know that the generations of barristers will now have a direct acquaintance with Dr Ambedkar’s persona. For a number of years, the Gray’s Inn and I discussed the ways in which we could raise the profile of Dr Ambedkar at Gray’s Inn. Dr Ambedkar inspired the Buddhist movement in India and was the chief architect of India’s Constitution. It is therefore demeaning when he is merely reduced to a leader of the ‘untouchables’. He believed in secular society. We can imagine his outrage at the draconian laws that are being liberally used by the Indian Government now to incarcerate without bail, academics (including Dr Anand Teltumbde), human rights activists who raise their voice against atrocities against minorities or corruption.”