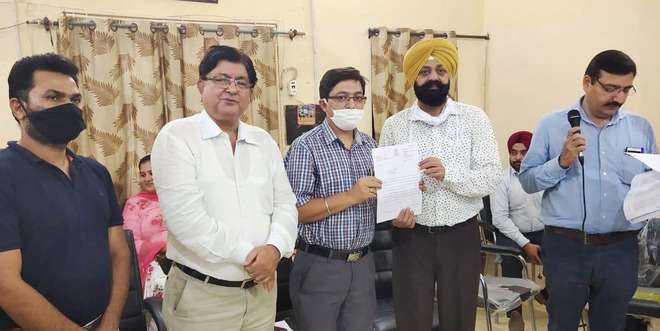 On completion of two weeks of the Teacher’s Day, the Education Department observed ‘Teachers’ Fortnight’ at a symbolic function held at the office of District Education Officer (DEO) here on Saturday.

A total of 368 teachers were honoured at the function, with 10 to 15 of them receiving their appreciation letters at the venue while others were congratulated via webinar and asked to collect the letters from the office later.

The Education Secretary, Krishan Kumar, some school heads and teachers were among those who participated in the ceremony digitally. Krishan Kumar said without dedicated efforts by schoolteachers, it wouldn’t have been possible for the state government to bring in qualitative improvements in education.

He said the schoolteachers had not only been putting in their best efforts to ensure augmentation and extension of infrastructural facilities with proper utilisation of government grants and community mobilisation, but also doing a commendable job in various education drives such as ‘Each One, Bring One’, ‘Smart School’, ‘Mission Cent Percent’, ‘Distribution of text books and mid-day meal scheme, ‘Developing Punjab Educare app’, ‘Punjab Achievement Survey’ and ‘Online education’.

He said though schools had been lying closed, teachers had strengthened their bond with students and parents so cohesively that students had been approaching their teachers via digital platforms without hesitation to get their doubts cleared.

“The Sikhiya Sudhar Muhim has virtually been converted into a mass movement, and this could easily be gauged from the fact that during the week-long virtual parent-teacher meet, government schoolteachers interacted with parents of over 18 lakh students to apprise them of the performance of their wards,” said the Education Secretary while lauding a Jalandhar-based team of teachers for developing and operating the Punjab Educare app, which has been a landmark contribution towards digital education. He said lakhs of students, including those of other education Boards and states, were availing themselves of the benefits of the app.