Groups were created to ensure 100 per cent participation in tests 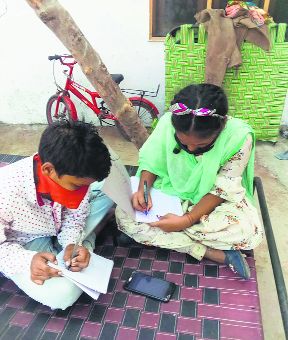 While expressing satisfaction over the role being played by teachers in creating awareness among the masses related to the Punjab Achievement Survey (PAS), Krishan Kumar, secretary, Punjab School Education Department, said they have formed buddy groups as well as started ‘buddy week’ in schools from Monday to ensure 100 per cent participation of students as well teachers in online tests.

He said the aim was to foster team spirit among students, teachers and the officials of the Punjab Education Department and to encourage sharing of good practices or the work done by teachers or students with their counterparts.

“Recently, there were reports that many students, due to lack of mobile phones, were not able to participate in the online tests. Thus ‘buddy groups’ have been created with the sole purpose to solve this problem. Teachers have devised a well-planned strategy and constituted ‘buddy groups’ at the cutting-edge level,” the Education Secretary said, adding that all those students, who did not have mobile phones, have partnered with those students, teachers or officials, who are living nearby and have access to smartphones.

Besides, different sections of society, including School Management Committee (SMC) members, panchayat members, guardians of governance (GoGs), mid-day meal workers, anganwari workers, DIET students and pass out students, have also been mobilised to help each other by providing them their mobile phones for attempting the test, he said.

Chander Shekhar, district mentor, English and social studies, said: “The first round of tests for the Punjab Achievement Survey has been scheduled from September 21 to October 3.” He said about 26 lakh students of government and government-aided schools studying in Classes I to XII were going to be the part of the test.

He said to ensure overwhelming participation, the department dedicated this week as ‘buddy week’ to bring the Education Department officials, teachers as well as students under the ambit of ‘buddy group’.

When asked about the functioning of these buddy groups as to how many members are part of one buddy group, Shekhar said there was no such hard-and-fast rule on the number of participants in one group and said it completely depended upon teachers and students as to how they wish to operate their group and add members.

“Our focus through buddy groups is to ensure that good practices are being shared and no student is left behind in studies due to lack of smartphones,” he said.

Buddy group is an initiative of the government, wherein all those students who do not have mobile phones, partner with those students, teachers or officials living nearby having access to smartphones. Besides, officials of the Education Department, teachers and students can share their innovative ideas, good practices and techniques of using digital applications through buddy groups. Teachers say this activity would help in giving a fillip to the qualitative improvement drive by fostering team spirit as well as leadership qualities among students.