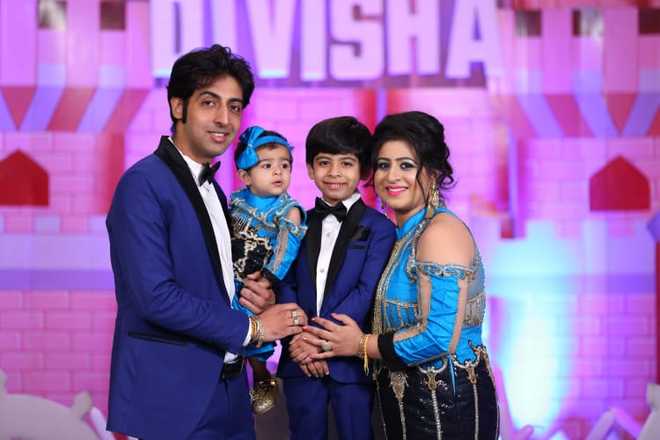 Chetan dheer with his family With deepkamal story

The plans of Chetan Dhir and his wife to celebrate their marriage anniversary by going on a two-day trip to Vaishno Devi (Saturday and Sunday) went haywire, thanks to a faulty coronavirus testing system.

Running a sport goods manufacturing firm, Chetan (32) had got four chopper tickets booked. These included for himself, his wife Radhika (30), son Atharav (7) and daughter Divisha (4). Besides, he also got hotel booking done till tomorrow. The family was to leave early this morning and had even got booking for the ‘Aarti’ done but a faulty coronavirus report spoiled their plan.

Chetan said that since corona report was needed immediately and was mandatory, his family took the Covid-19 Rapid Antigen Test from the Civil Hospital on November 19. He said since the RT-PCR test report could take a day or two, hence, they went for the the Rapid Antigen Test.

To his surprise, while his wife and daughter tested negative, he and his son tested positive. He said neither he nor his son had any symptom and they got really disturbed and were asked to cancel the trip and go for home isolation immediately.Chetan said he went to a private laboratory immediately after the report on November 19 and got the family’s RT-PCR test done. He said the report came on Saturday evening and all four members tested negative. He said for two days, he and his son remained isolated from their family.

“I did not just face financial loss owing to ‘wrong testing’ but also a psychological trauma owing to ‘wrong Covid test report’. It also had a detrimental effect on my son’s mind,” he said, adding that he would take up the matter with the authorities in a day or so.