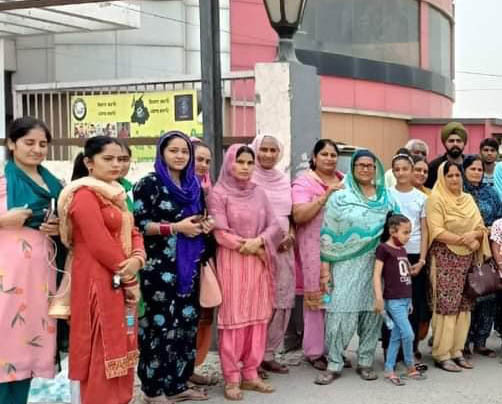 Women ready to be a part of ‘Kisan Sansad’ at Jantar Mantar in Delhi.

She will head out from her village at 2am on Monday to be a part of the contingent of women who will head to Jantar Mantar tomorrow to participate in the ‘Kisan Sansad’.

Balwinder is going to the Singhu border for the third time. She had been there in the winters twice. In yesterday’s fire incident, two trolleys and a shed near where she camped last time were gutted. Days ago, she also witnessed farmers wading in ankle-deep waters which entered into their tents. But it has only strengthened her resolve to go back again.

Across the state, women contingents from various villages are heading out to participate in the ‘Women Sansad’ at Jantar Mantar on July 26 which will be run solely by ‘Nari Shakti’ (women) tomorrow in continuation of the ‘Kisan Sansad’ being held. The BKU (Rajewal) is sending contingents of five women from every district. Block level teams of women have also been set up to mobilise struggle in villages.

Balwinder Kaur says, “It is a deaf and dumb government. Our progress has been stalled. We lost 400 to 500 farmers but they don’t listen.”

She adds, “We are going there to assert the voice of women. We will lose livelihoods if the laws are not repealed. We can’t let it happen.” Speaking about depleting water table in villages and its effect on farmers, she says, “We will take to crop diversification if the MSP is given. But we are not even being given MSP on paddy. What to talk of diversification?”

Amardeep Kaur, Assistant Professor, Guru Nanak Khalsa Girls College, Sagh Dhesian, is skipping the university exam duty specially to participate in the stir tomorrow. From Rurka Kalan, she will also be going for the third time, said, “The government might think farmers are helpless and illiterate people. But the farmer struggle is proof we are a group of organised, educated people who know how to fight for our rights. My grandfather and father toiled in fields to make me a professor. I am going to honour their struggle. We women are holding our own Parliament tomorrow. We won’t relent until the farm laws are repealed.”

Dr Manjit Kaur, tehsil president, BKU (Rajewal) Mahila Morcha who hails from Kang Sabo, said, “While farmers are being called terrorists and hooligans, our fight is for our lands. We are protesting tomorrow to reclaim our rights.”

Garhshankar: The 45th batch of All-India Kisan Sabha, led by Bibi Subhash Mattoo, left on Sunday for Delhi to join the farmers' movement in Delhi. On the occasion, state vice-president of All-India Kisan Sabha, Darshan Singh Mattoo and state leader of Janwadi Istri Sabha Subhash Mattu said the Centre was trying to instigate farmers to end the agitation by defaming it. They said the farmers of the country have been demanding the scrapping of farm laws on the borders of Delhi for the last eight months and more than 500 farmers have been martyred in this struggle, but the Modi government at the Centre has retained its insistence. The farmers' struggle will continue until the three black laws are repealed and legal status is given to MSP. OC