To protest at Ramlila Ground, Jantar Mantar in the national capital 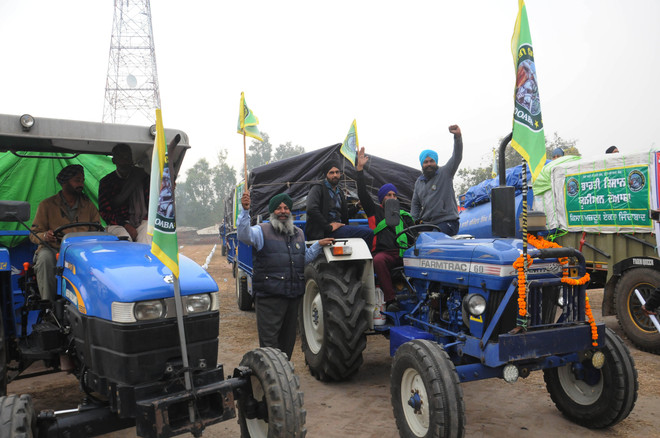 Despite the Delhi Police denying permission to farmers’ organisations and the Haryana Government sealing the Haryana-Punjab borders to stop them from entering Delhi, hundreds of farmers from around the region commenced with their ‘Delhi Chalo Andolan’.

A huge gathering of farmers (on tractor trailers) was witnessed at Phagwara on Wednesday, it later moved towards Delhi. An equal number of farmers under the banner of various farmer outfits from Hoshiarpur, Nawanshahr, Kapurthala, Tarn Taran and Phillaur also assembled at Ladhowal toll plaza in Phillaur. Braving the chill, the elderly group of farmers also expressed anger against the controversial farm laws passed by the Centre. “We are aware that the Delhi Police have rejected our requests and threatened us of legal action against our protest in the national capital, but nothing can stop us now. It’s about our rights and we can’t allow the government agents to act as a barrier in safeguarding these,” said Lakhbir Singh (65), a Phillaur-based farmer.

Nearly 300 farmers under the banner of Bharatiya Kisan Union (Doaba and Rajewal) marched from Phagwara to join other farm unions in Ludhiana.

The protest by farmers went on peacefully on Wednesday. A posse of police was deployed to keep a check on any untoward incident. The highways were open and farmers were systematically sent to avoid any inconvenience to commuters. —Sanjeev Kumar, SHO, Phillaur

Satnam Singh Sunny, general secretary, BKU, said: “Along with ration and supplies for two months, farmers started with their ‘Delhi Chalo Andolan’ on around 150 tractor trolleys. If the government tried ceasing our movement, which would end at Ramlila ground and Jantar Mantar in Delhi, it will only bring inconvenience to the general public. We won’t discontinue with our agitation and will block the national highways. Only the government will be held responsible in causing trouble to commuters.”

experts to say whether there is a mutation or not. But the only change we see is a reduced capacity to retain oxygen levels in the blood in several serious patients. Additionally, there have been a sizeable number of young people without known co-morbidities in whom also this same dip in oxygen was observed.”

Urologist Dr RS Chahal says: “It is possible that a mutation might be witnessed in the second wave of Covid. The number of deaths could be expected to be higher. Delay does remain our prime concern and often the severity of symptoms among patients are aggravated by delay. Patients are still refusing to take Covid seriously. If they are asked to take precautions in the early stages, they treat it very lightly. It is only when things get very serious that they understand the seriousness. When Cytokine storm (an aggressive inflammatory response – a reaction to external stimuli which if accompanied by Covid could be fatal) occurs, health can get worse within hours. People need to realise that precaution, and timely treatment are key to fighting the virus.”

Hoshiarpur: Protests at the Lachowal toll plaza continued for the 46th day on the call of 30 farmer organisations against the agricultural laws passed by the Central Government. A large convoy of tractor-trailers led by leaders Gurdeep Singh Khun-Khun, Omkar Singh Dhami, Randhir Singh Asalpur, Parminder Singh Lachowal, Swarn Singh Dhugga, Parminder Singh Pannu and Harpreet Singh Lali, including a large number of farmers from the area left for Delhi on Wednesday. The farmer leaders in the convoy, Jasvir Singh Chakkowal, Akbar Singh Bure Jattan and Davinder Singh Kakkoan said farmers have prepared for a long struggle and they are taking along two months’ ration, medicines and other essentials for the ‘Delhi March’. He said the news related to the movement will be updated on social media regularly and they have also arranged for WiFi facility for it. A large number of area residents also joined hands together for financial assistance. The residents of Sherpur Katcha, Kothe Jattan, Muradpur Nariala, Dhugga village and Begumpur Jandiala collectively contributed Rs1, 03,900 for farmers’ struggle. OC

No farmer was seen at Behram Toll Plaza, as protesters started with their journey towards New Delhi on Wednesday. Bharatiya Kisan Union (Doaba) along with other unions were protesting at toll plazas for the past two months. Ajaib Singh, one of the protesters at the toll plaza, said it was now or never like situation for them. “We have now started towards the capital and will hold dharnas there. No one can stop us. We are ready for the big fight now. No matter what, we are not going to stop and the Centre will see our strength,” he said.