Farmers clash with cops near BJP protest site in Jalandhar 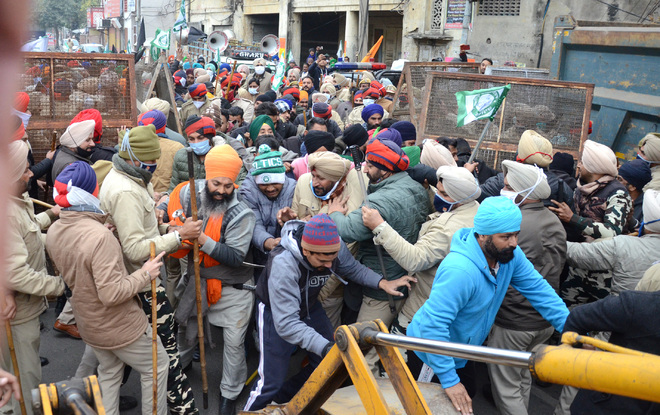 Angry farmers on Sunday broke barricades and clashed with the police during their protest to gherao the BJP’s venue for a sit-in at Company Bagh Chowk in Jalandhar.

The BJP had on Saturday announced a sit-in to condemn the controversial statements of MP Ravneet Singh Bittu and over the deteriorating law and order in the state.

However, the situation became tense when a large group of farmers, who were protesting near the Press Club Chowk, marched towards the BJP dharna site and were stopped by the police. They broke through the barricades put up by police.

Sharma blames it on Cong workers

Protesting farmers also tried to stop BJP state president Ashwani Sharma from entering the venue and started raising slogans against the Centre and the farm laws.

The protesters also tried to push their way through the barricades and clashed with the police, resulting in some farmers receiving minor injuries. Meanwhile, the BJP president made his way to the venue amid heightened security. It took over 200 policemen to control the angry farmers.

All major routes connecting to Company Bagh Chowk were barricaded. Apart from a large deployment of police personnel, 16 buses of anti-riot police, with 23 personnel in each vehicle, four JCB machines, two water cannon vehicles and four tippers were placed at the spot to prevent farmers from breaking the barricades.

Kulwinder Singh, a farmer, said, “We had no intentions to indulge in violence at the BJP venue. All we wanted was to protest peacefully. However, the police blocked our way, which resulted in violence”.

Condemning the police action on farmers, Kashmiri Lal, a farmer union leader, said: “We were peacefully holding the protest when the police created ruckus by placing barricades and providing high security cover to the BJP workers.” He threatened to organise a similar protest outside the Deputy Commissioner’s office shortly.

Meanwhile, Sharma blamed Congress workers of indulging in petty politics by disrupting the law and order in the state. Assistant Commissioner of Police (Central) Harsimrat Singh said, “We had anticipated such a situation. Hence security arrangements were made accordingly”. Balkar Singh, Deputy Commissioner of Police (Law and Order), who was also present at the protest site, said, “The farmers broke through the barricades and the police were just trying to stop them”.

When asked why the tippers were installed, he said to avoid any clash between the BJP workers and farmers, we made the necessary arrangements, including the placement of tippers.