Say won’t budge until government accepts all their demands 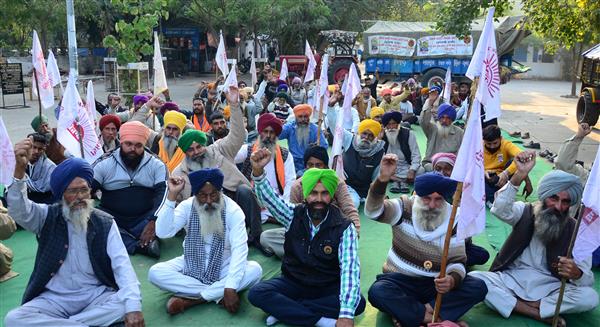 Farmers raise slogans against the government outside the Deputy Commissioner’s office in Jalandhar and block the entrance to the complex with tractor-trailers on Friday. Protesters stay put in the trailers brought by them as it gets cold outside in the night. Sarabjit Singh

Members of the Kisan Mazdoor Sangharsh Committee have today begun an indefinite 24x7 dharna outside the Deputy Commissioner’s office in Jalandhar in support of their demands. A memorandum of their demands, which was addressed to Chief Minister Bhagwant Mann, was submitted today to the DC. 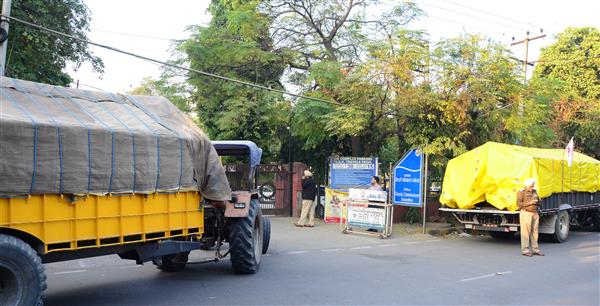 The key demands included compensation and jobs to the next of kin of those for who lost their lives in the anti-farm law stir, 100 per cent subsidy for stubble management, clean river or drain water for irrigation and eradication of drugs from the state.

Kisan Mazdoor Sangharsh Committee vice-president Sukhwinder Singh Sabhra said: “Our key demands include withdrawal of false cases against farmers and labourers, compensation from the government for paddy stubble management, the state government’s resistance to the Electricity Act, 2022 and implementation of the Swaminathan report.”

Farmers also raised concerns over waters of the state getting polluted and demanded waters of surface water bodies be cleansed and provided to them at tail-end villages for irrigation.

They said waters of the Chitti Bein, Sutlej, Beas and other water bodies had been sullied by sewerage and industrial wastes from Jalandhar, Ludhiana, Phillaur, etc. They demanded that the drainage system in the state be fixed and clean water be made to farmers. They also demanded that trees be planted by drains, rivers, nullahs, streams, roads.

Farmers said from today onwards they will hold dharnas at the district headquarters on these demands.

They said farmers, labourers, women, children and elderly will be a part of the dharnas.

Salwinder Singh Jania, district president, Kisan Mazdoor Sangharsh Commitee, said: “This is our pakka morcha outside the DC office in Jalandhar. As long as the government doesn’t agree to our demands, the caravan of out tractors and trolleys is only going to grow. More tractors and trolleys will come tomorrow and day after. A long struggle will continue for the same. As long as our issues aren’t solved, we will not budge from here.”