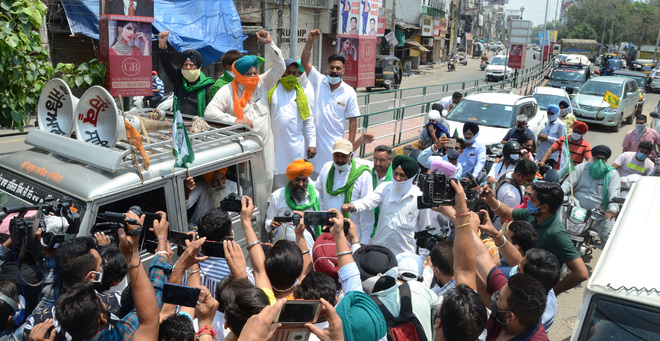 Farm activists urge traders to open their shops in Jalandhar.

A protest against the lockdown organised by farm unions urging shopkeepers to pay two hoots to the government guidelines and come out and open their shops failed to evoke any response.

Activists came on jeeps and bikes from Noormahal and made various stopovers in markets before heading back.

Their biggest show of strength was at Jyoti Chowk where they halted for 20 minutes and tried to embolden shopkeepers addressing them via public address system. But shopkeepers and dealers did not come out in their support. Shopkeepers had been holding meetings with the MP, MLAs and the Deputy Commissioner from the last two days who had assured them that all shops could open from Monday for a limited time from 7 am to 3 pm, over which they had already expressed satisfaction.

Farmers were warned by the police that they would face action for violating the Covid lockdown restrictions imposed in the state and an FIR would be registered them under Section 188 of the IPC and the Disaster Management Act.