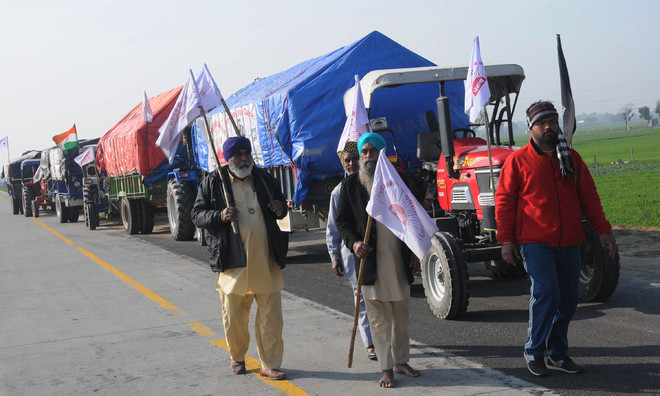 Jagtaar Singh (18) from Chaudharywaal village is the youngest in a group of 30 to 50 men, who have packed their bags and months of ration, on a day’s notice, to head to the Singhu border.

From the pandori village, too, a jattha of 15 to 20 men headed out for the Delhi border under the call given by the Bhartiya Kisan Union (Rajewal), said district president Mandeep Singh Samra.

While farmers of the state have been as moved by Rakesh Tikait’s tears as their Haryana counterparts, the violence beamed on TV sets from the Singhu border have further incensed farm leaders, who are heading out in hordes to the Singhu and Tikri borders from Jalandhar. Even as their union leaders in Delhi busy themselves finding the whereabouts of the youth whose wincing face has gone viral on media, the videos and posts of the vent have sparked huge number of people to head out for the Delhi border.

As many as 50 to 60 tractor-trailers have started from Shahkot, Lohian alone, while more have been mobilised from the cities and gurdwaras. Yellow, white and Tricolour flags have become a constant on the highway.

Ajaib Singh from Lohian, who returned from the Singhu border on January 26, is going back again. “I’m just headed back on a night’s notice. We are very angry about the videos that are coming in. All villagers are angry. We couldn’t sleep all night. Our leaders have asked us to join in large numbers. Famers were not the perpetrators of the violence. On the R-Day march, too, many were misled.”

Salwinder Singh Jania, president of the district unit of the Kisan Mazdoor Sangharsh Committee, said: “Asi panj nu jana si par leaderaan ne call kiti tan khade pair tur paye. (We had to go on February 5, but when leaders called, we started on Saturday itself.) Farmers from Malsian, Nakodar, Lohian, Shahkot are also leaving —some today, while many more in the coming days. While Rakesh Tikait’s statement has united farmers, lakhs went after the videos were released. Meanwhile, Saturday’s visuals have angered them. Hooligans are attacking farmers. This isn’t justified. Farmers are heading out in lakhs to lend strength to the movement.”

Dalbir Singh of Kakran village said: “Not only us, other villagers are also keen on leaving. People stacked up vegetables, flour, pulses and grains the moment we said we needed supplies for Singhu. People are wholeheartedly backing the Singhu morcha. They are angered by TV visuals and we have come along with generators, 15 to 16 quintal of supplies and the needful. We will return only after the laws are withdrawn.”

Jagtaar Singh (18), a Class XII student, said: “We did not like what we saw in the videos. I am the only one from my family going to express solidarity there. Many other youths from my village are also going. We will come back after the laws are withdrawn.”

Farm leaders have once again started mobilising farmers in the state. After the Red Fort incident, various kisan unions decided to give a befitting reply to the Centre and miscreants that their movement hasn’t weakened.

Manjit Singh Rai, chief, Bharatiya Kisan Union (Doaba), who came back from Delhi on January 27 asked every district head to meet people and tell them that whatever happened on Republic Day was not right and it was a well-planned strategy of some persons who were against the movement.

“I came back to make people aware regarding the conspiracies that are being hatched to attack the sanctity of the movement. Now, more people are supporting us and many have desired to go to Delhi,” he said.

“Several people told us that they will come to Delhi and it clearly tells that after the incident, a large number of people are connecting with us,” he said. Rai said a peaceful ‘Sadbhavna Yatra’ was held on Singhu border and national flag was installed on every tractor during the yatra to send a message that they respect the Tricolour.

Davinder Singh Sandhu, vice-president, Bharatiya Kisan Union (Doaba), held a meeting in Khatkar Kalan with farmers. “We asked people to forget about the unfortunate incident on January 26. We must stay together,” he said. Co-convener of Kirti Kisan Union (youth wing) Boota Singh has taken to social media to rope in support for the movement.