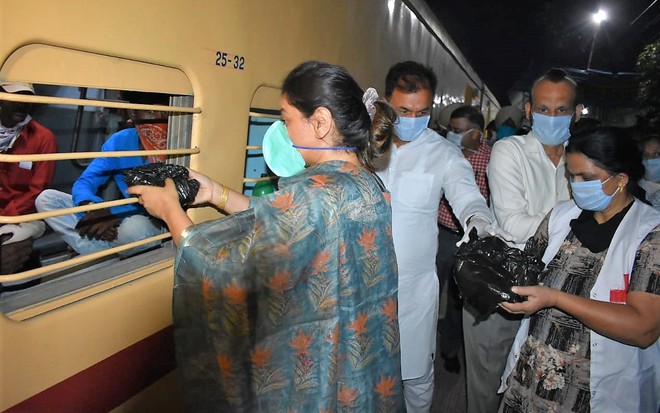 The first Shramik train from the city with 1,600 migrant workers left for Vaishali in Bihar on Sunday night. It was the first train from the city railway station that will cover such a long distance. Earlier, trains that covered the maximum distance were run between Hoshiarpur and Delhi.

Officials of the district administration and Red Cross Society provided specially prepared food packets to the workers. Besides, biscuits, water bottles and fruits were also provided to all passengers.

Chabbewal MLA Dr Rajkumar provided sanitisers and masks to the workers. DC Apneet Riyait said this was the first Shramik train, which departed from Hoshiarpur. She said earlier, workers were sent to Jalandhar and Ludhiana by buses.

She said of the 1,600 persons, 760 were from Hoshiarpur subdivision, 327 from Mukerian, 139 from Dasuya and 111 persons from Garhshankar. The DC said more trains will depart from Hoshiarpur in the coming days.

SDM Amit Mahajan said about 2,600 workers, who have registered online to go to their native places, have been contacted by phone and their consent has been obtained. He said thereafter, arrangements are being made to send them to their native places by train. All of them were medically examined. BJP national vice-president Avinash Rai Khanna was also present on the occasion.