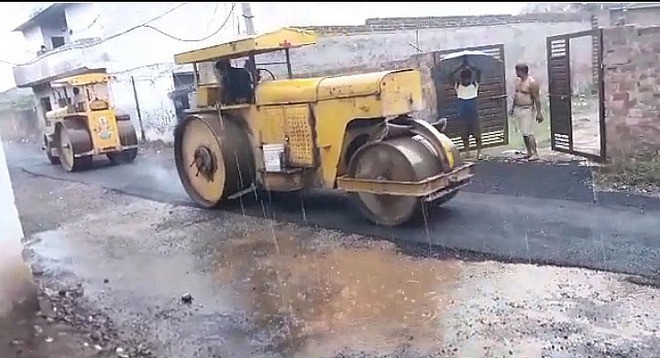 The usual answer of Municipal Corporation (MC) officials when someone complains about bad road during the rainy season is, “Let the monsoon be over”.

While it is standard protocol not to build roads on moist ground , a video clip of a road being constructed during heavy downpour yesterday had gone viral on the social media.

A road roller lays hot tarcoal on the stretch as steam gushes out on the slushy patch being laid by the civic body team. The amount of steam released points towards water trapped under tar, which is being laid on the road.

The video of the shoddy work of the MC road construction team was circulated on the WhatsApp by an alert onlooker. Within minutes the area councillor was flooded with calls by local residents and industralists, who wanted the work to be stopped.

Notably, the road was being constructed in Gadaipur Market, adjoining the Gadaipur and the Focal Point areas. The stretch is in Ward No. 3, whose area councillor is Risha Saini.

Witnesses said senior officials weren't even present on the spot to supervise work. Some vehicles full of material were sent back after the uproar.

Over 12 feet log stretch was constructed in the rain, but the work was stopped as soon as residents and commuters built pressure on the MC authorities. Area councillor Risha Saini’s husband Ravi Saini also visited the spot today.

Tejinder Singh Bhasin, industrialist and president of the association in the Gadaipur area, said, “Shoddy job is delplorable. No one was there to ask the MC team to stop work. I was flooded with phone calls from people, who complained about the ongoing work in middle of the downpour. We immediately called the area coucillor and got the work stopped.”

“We have also asked the area councillor to get the entire stretch reconstructed as the quality of work is bad. The councillor has assured us of the needful,” he added.

Narinder Saggu, an industrialist at Gadaipur said, “We believe the MC team came when it wasn’t raining. The rain started while they were working. When the road is moist and filled with water the tar cannot hold on to the surface. The MC team should have stopped the work immediately when it started raining. But they kept on working.”

Speaking to The Tribune area councillor’s husband Ravi Saini said, “I called up the SDO and the JE yesterday and also visited the spot today along with them. The road construction work was stopped as soon as we received calls today. Around 13 to 14 feet built-up road will be reconstructed.”

“The road construction work has been stalled for now. It will resume after rain subsides. It will be completed only under proper supervision,” he added.