Gang of snatchers busted in Kapurthala 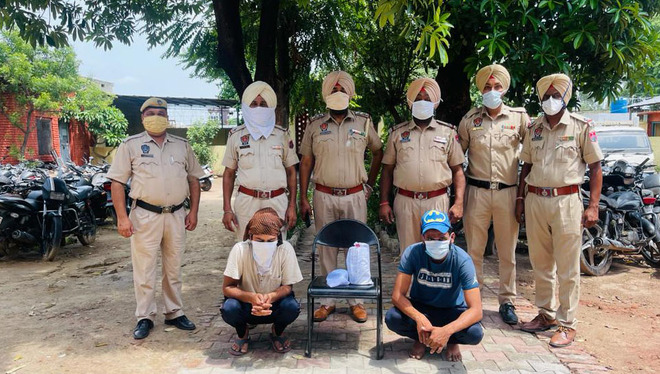 Two accused in the custody of the police on Wednesday.

In its crackdown on snatchers under the Safe City Project, the Kapurthala police today solved nine cases of snatchings of gold ornaments and arrested two accused besides recovering the five gold earrings and 14 intoxicating injections.

The accused have been identified as Ajay alias Phull of Lakshmi Nagar and Sharnjit alias Sunny of Kadupur village, Kapurthala.

Senior Superintendent of Police (SSP) Harkamalpreet Singh Khakh said that the Safe City Project was launched in the city in the last month under which new PCR patrol motorcycles teams were deployed for swift action on every complaint and were directed to keep close surveillance on the activities of anti-social elements. The SSP said that during a routine checking in crime-prone areas, the accused riding a motorcycle (PB08-DW-8096) were stopped by cops at Sukhani Bridge. During the search, 14 intoxicating injections were recovered from them.

The SSP said the police team has recovered five earrings from the accused.

He said that a case under Sections 379-B of the IPC and other sections of the NDPS Act has been registered against them. — TNS